Hawaiian Ensemble to perform at Fair 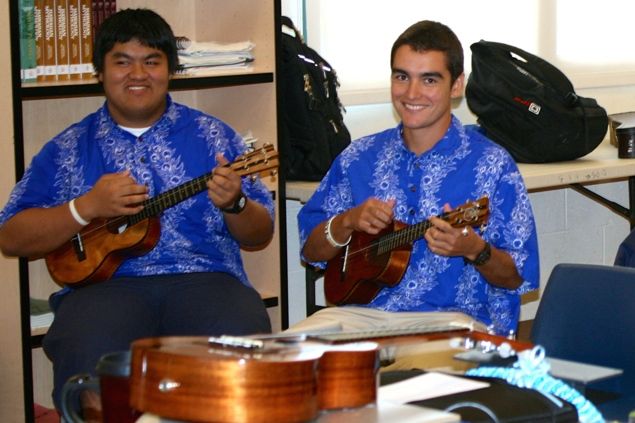 Blake Fukumoto and Richard Renaud are part of the musical talent of the Hawaiian Ensemble. The entertainment group will be performing at the Maui Fair for the first time in their history this Thursday at 7 p.m.

Hawaiian Ensemble has, in many ways, been the face of Kamehameha Maui, performing at both campus and community events.

This year they are adding another venue to their growing list of performances — the Maui Fair. The ensemble will be performing at 7 p.m. in the event arena on Thursday, the first night of the fair.

Kumu Kalei ʻAʻarona-Lorenzo, club adviser, said that they have tried to perform at the fair in the past, but it never seemed to work out because the group members were too busy with other fair duties.

Every year, the group operates the lūʻau stew and poi mochi food booth, and with all the responsibilities and duties, performance was always out of the question. This year, the booth is cutting its offerings down to just the poi mochi.

“We always wanted to perform at the fair, but we never had to the time or the manpower,” Kumu Kalei said. “This year there are not as many people needed for the shifts. There was always so much different food to be sold, and that was very time-consuming.”

Adding to the pressure of this new performance is that many new students have joined Hawaiian Ensemble this year and need to get up to speed quickly for this early season show.

“They’re trying their hardest to get all the songs down, which is heavy for them, and we’re finally starting to blend our voices,” junior Richard Renaud. “I feel nervous about the performance but I think we’ll do good.”

The singing group will be accompanied by Ka Pā Hula o ʻAʻapueo, a campus hula group that works in tandem with the Hawaiian Ensemble.