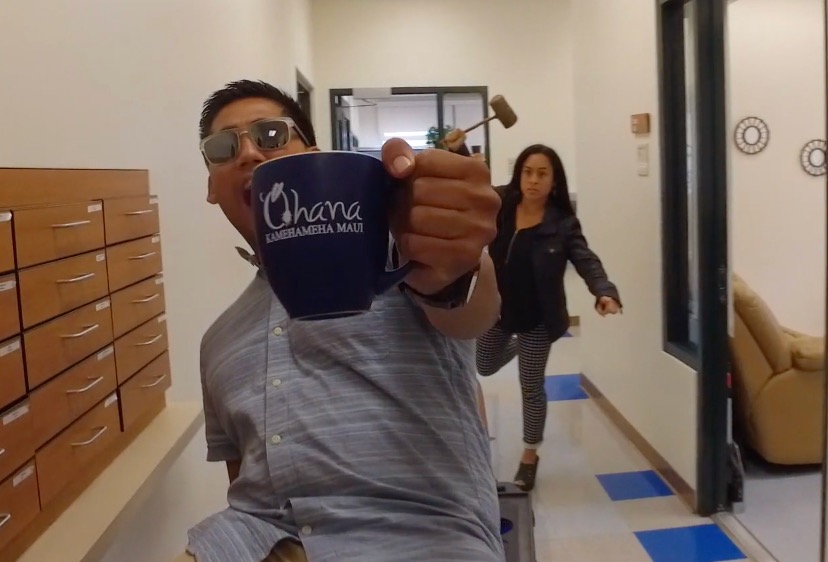 In this frame grab from their video, the high school office joins the nation in the latest craze, the Mannequin Challenge.

All over the country, schools, sporting teams and celebrities are doing the Mannequin Challenge, which requires participants to pose and remain motionless with Rae Sremmurd’s “Black Beatles” playing in the background, while someone walks through the tableau and films it.

Monday at a junior class meeting, the class officers suggested doing the Mannequin Challenge to release the stress of preparing for senior project pitch day on Thursday. Juniors were all for it, and they quickly assumed funny poses. The challenge did its job and lightened the mood for Papa Lama.

“It gives us the chance to show how close we are as a school and class to those on our neighbor islands,” junior Saje-Marie Kanemitsu said.

One day later, the KSM high school office followed their lead and pulled off their own Mannequin Challenge (see the accompanying video).

“It gives us the opportunity as an office staff to do something fun,” she said.

Afterwards, Ms. Kaʻawa said that she wants to challenge all Kamehameha groups, including high school clubs, classes, and teams, and kula haʻahaʻa and kula waena groups, to take on the challenge as an opportunity to get closer.

To our readers: If you take up the challenge, post a link to your video in our comments section below, tell us the name of your group, and we may add your link to our article for all to enjoy.