Unless you’ve been off island for the past two months, you can’t have escaped all the talk about GMO’s, or genetically engineered organisms. Even on the mainland, major news outlets like U. S. News & Woirld Report and ABC News have picked up the story.

But, here on Maui, itʻs all too real, and voters will soon be deciding the issue. As the election draws near, some residents are wondering what it all means.

Basically, an initiative to place a moratorium — or stop order — on farming of genetically engineered organisms has been put on the November 4 general election ballot.

The ballot questions reads as follows:

“Should the proposed initiative prohibiting the cultivation or reproduction of genetically engineered organisms within the County of Maui, which may be amended or repealed as to a specific person or entity when required environmental and public health impact studies, public hearings, a two thirds vote and a determination by the County Council that such operation or practice meets certain standards, and which establishes civil and criminal penalties, be adopted for Maui County?

Let’s break it down.

In the Maui County Proposed Amendments to the Revised Charter of the County of Maui Public Notice, Section 1 states, “In Maui County, GE (Genetic Engineering) Operations and Practices include the cultivation of GE seed crops, experimental GE test crops, and extensive pesticide use including the testing of experimental Pesticides and their combinations in what is effectively an outdoor laboratory.”

In other words, the initiative is calling for a suspension of all GE operations and practices until those practices can be proven safe for not only the residents of Maui County, but also the ecology as well.

The initiative is requiring that those farmers who engage in GE research, planting, and cultivation get an Environmental Public Health Impact Statement that would later be reviewed by the County Council for approval.

The State of Hawaiʻi Department of Health Office of Environmental Quality Control website states that the purpose of the chapter is to “help stimulate, expand and coordinate efforts to maintain the optimum quality of the State’s environment.”

The purpose of an Environmental Public Health Impact Statement, according to the Department of Health Administrative Rules website, is to ensure that “all environmental concerns are given appropriate consideration in decision making along with economic and technical considerations.”

Once the Impact Statement is reviewed by the County Council, the public will be invited to attend public hearings on whether or not genetically engineered organisms meet health and safety standards. Then, a lifting of the moratorium would be put to a vote in Maui County, and two-thirds of the voters would need to approve it in order to re-allow GE organisms.

Violators would be subject to both civil and criminal penalties.

Section 9 of the Maui County Proposed Amendments to the Revised Charter of the County of Maui Public Notice entitled, “Right of Action for Violations – Attorneys’ Fees,” states that the Department of Environmental Management “may bring an action in a court of competent jurisdiction to enjoin any person or entity from violating this chapter.”

Simply put, if one does not pass the review of the Environmental Public Health Impact Statement by the County Council, one could face civil monetary penalties in amounts of $10,000.00 for a first violation, $25,000.00 for a second violation, or $50,000.00 for a third violation.

On top of monetary penalties, one could face jail time.

The wording of the initiative is not the only thing that is confusing voters. Some residents aren’t sure which box to check on the ballot.

To clarify, voting “yes” on the ballot would mean you are in agreement with the initiative and want to put a temporary moratorium on genetically engineered organisms.

Voting “no” on the ballot means that you are in disagreement with the initiative and want to allow continued development of genetically engineered organisms on Maui.

To read the entire Maui County Proposed Amendments to the Revised Charter of the County of Maui Public Notice for yourself, click here. 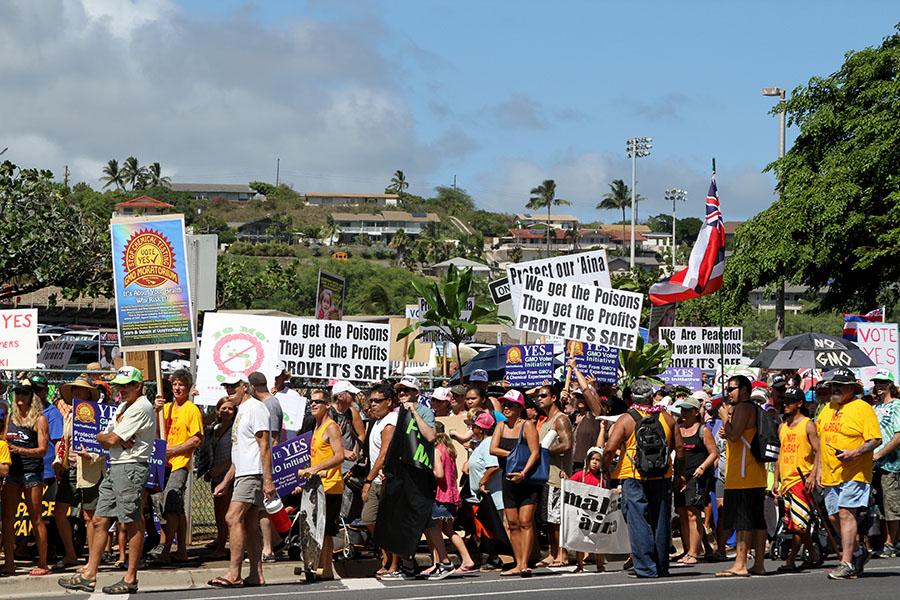 Maui County Residents came together at War Memorial Stadium in Kahului, Maui, October 26, 2014, to march for the GMO Initiative to suspend GMO operations.

Be honest: how many of you eat organically? Because after learning about GMO’s, you might want to start.

Either way, I’ve made up my mind. I’m saying “yes” to the Maui County ballot initiative to impose a temporary moratorium on all genetic engineering activities on Maui until there is more information about their safety.

This ʻōlelo noʻeau tells it all:

He aliʻi ka ʻāina; he kauā ke kanaka. The land is a chief; man is its servant.

This is a saying we should all live by. The land has no need for man, but to live, man needs the land. So why are we drowning it in pesticides?

As a Native Hawaiian, I take pride in the beauty of the land and ocean surrounding us. These are the same lands that our kupuna farmed and lived on; would they like what they see now?

Our kupuna lived off the land without GE organisms and pesticides, so why can’t we?

As a Native Hawaiian, I take pride in the beauty of the land and ocean surrounding us.”

Major agriculture companies including Monsanto, DuPont Pioneer, and Syngenta have turned our home into ground zero for GMO’s.

According to the Sustainable Hawaiian Agriculture for the Keiki and the ʻAina (SHAKA) website, Maui County is “the largest open-air, experimental chemical and genetics test site in the world.”

How’s that for tourism?

A SHAKA Movement pamphlet states that “over 80 chemicals are sprayed on GMO fields.” All of those chemicals can easily spread into our oceans and reefs, not to mention our groundwater, drinking water, and eventually, our bodies.

Glyphosate, the active ingredient in Roundup herbicide, has been found in blood samples and mother’s milk of Maui residents.

Oh, and who are the makers of “Roundup?” Monsanto.

In a Collective Evolution article entitled “New Study Links GMOs to Cancer, Liver/Kidney Damage & Severe Hormonal Disruption” written by Arjun Walia, Geneticist David Suzuki says, “By slipping it into our food without our knowledge, without any indication that there are genetically modified organisms in our food, we are now unwittingly part of a massive experiment.”

The opposition pleads that hundreds of jobs will be at stake. My question: “How?”

It is obvious that farming can be done without the use of genetically engineered organisms, so why don’t the big agriculture companies that will supposedly be “at risk” just do so? I don’t see how that puts jobs on the line.

Another claim made by the opposition is that anyone exposed to genetically engineered organisms could be held to a fine. For instance, a small farmer whose crops are cross-contaminated with GE pollen may end up with GE crops. This, however, is flawed because if GMO’s were banned in the first place, there wouldn’t be any issues with cross-contamination.

This claim just adds to the list of reasons that GMO’s should be banned.

On Sunday, October 26, many Maui County and Hawaiʻi residents gathered at War Memorial Stadium to march for the GMO Initiative. Members marched from the stadium to the University of Hawaiʻi Maui College, so know that you are not alone.

Until genetically engineered organisms can be proven safe, the County of Maui needs to suspend the use of them.

Vote “yes” on the GMO Initiative. 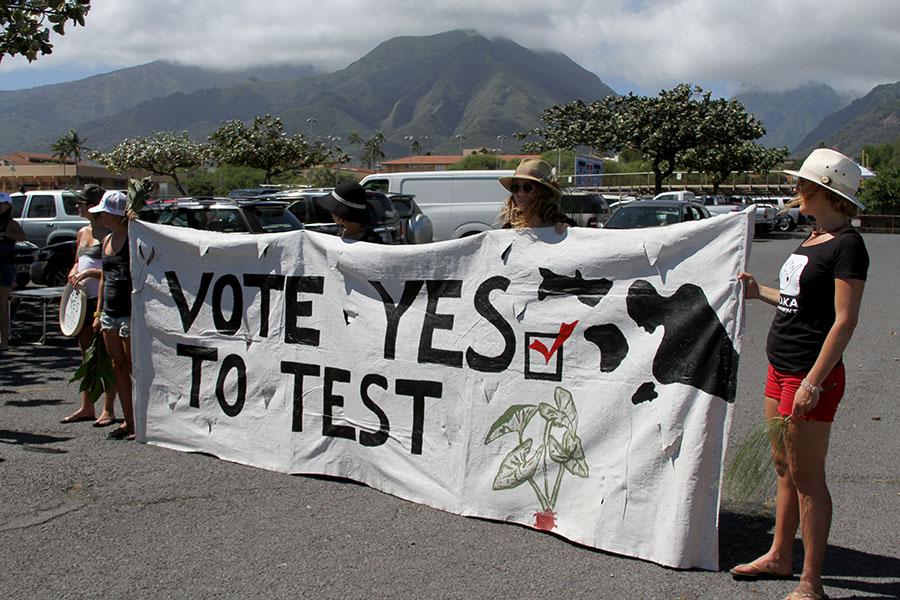 People wonder why a temporary ban on GMO farming – until proven safe – is a bad thing. Truth is, it’s not. The bad thing is how poorly the initiative was written. It’s full of flaws that pose a great threat, and though people are worried about genetically modified organisms, they should really be worried about what the initiative will really mean for Maui County.

Voters should know that if it passes, the initiative will bring a halt to some agriculture on Maui. People who support the initiative say they want to know if GMO’s are good or bad, but genetically engineered crops have already been deemed safe by expert federal regulatory agencies and other science-based institutions.

“To date, no adverse health effects attributed to genetic engineering have been documented in the human population,” stated the U.S. National Academy of Sciences.

“GM foods on the international market have passed risk assessments and are not likely to present risks for human health. No effects on human health have been shown as a result of the consumption of such foods by the general population in the countries where they have been approved,” stated the World Health Organization.

“Bioengineered foods have been consumed for close to 20 years, and during that time, no overt consequences on human health have been reported and/or substantiated in the peer-reviewed literature,” stated the American Medical Association.

An anti-initiative campaign points out that there are harsh penalties associated with it. The GMO pollen can be spread by winds, birds and insects, so farmers may unknowingly produce crops that contain genetically modified DNA.

Although a temporary ban on GMO farming seems harmless, the initiative is flawed and could have serious impacts on the economy of Maui County.”

More importantly, the moratorium would endanger hundreds of local jobs. According to Dr. Paul H. Brewbaker of TZ Economics, said that biotechnology business that work with transgenic seed and crops on Maui employs about  650 people who would be without a job if the initiative passes, which, he says, would create a domino effect on the economy. Families would experience a decrease in income, and the county would lose out on tax revenues that farming operations provide. The county uses the revenues to create and maintain necessities such as roads, irrigation systems, and sewers.

Although a temporary ban on GMO farming seems harmless, the initiative is flawed and could have serious impacts on the economy of Maui County. The initiative is misleading, and it’s important to know the facts before deciding to vote on November 4.