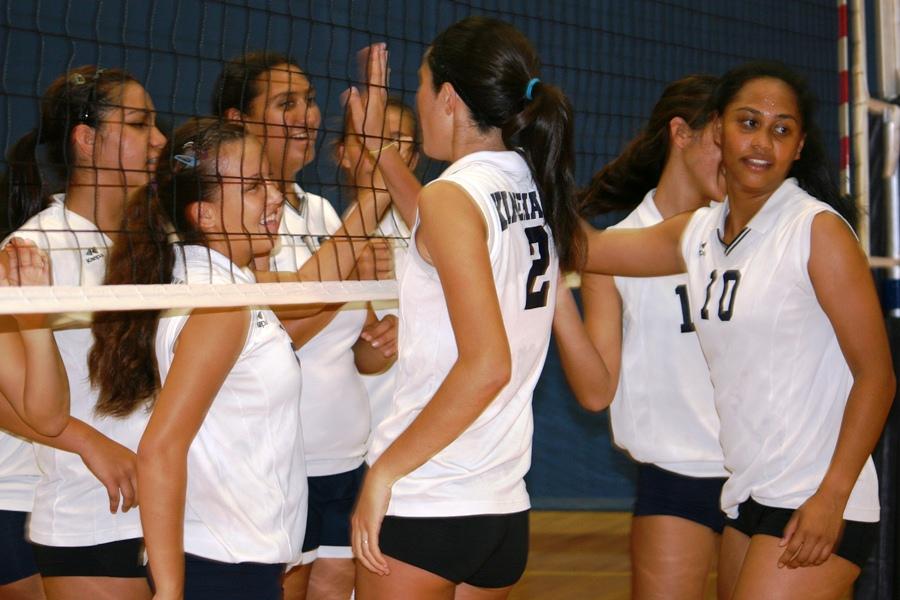 KSM girls volleyball fans can get a glimpse at what the season has in store this weekend at the Second Annual Maui Volleyball Invitational held on the Kamehameha Maui campus.

After an undefeated season last year, the team lost six seniors, but this year’s “young guns” are determined to do something never done before by a KS Maui girls volleyball team–to finish at the top in the state.

The team has been promoted as the young guns because only one player is a senior, and the team in general has less experience than in past years where the roster was filled with four-year seniors.

Junior Bobbi Kalama, setter, said that she doesn’t see the team’s youth as a concern. She said that Head Coach Bala Spencer has upped the physical level at practice and stressed the level of focus.

“In the past, our athletes looked the same, but when they got on the court, they played as individuals,” Coach Bala said. The new theme for the year, he said, is, “It takes teamwork to make the dream work.”

To emphasize team unity, Coach Bala has stressed that everyone, from parents to athletic trainers, are part of the team. He said that they are continuing the tradition of the canoe paddle, a wooden paddle that bears the team’s accomplishments. The paddle can be seen at all of their events, and the girls all uphold the tradition of touching it before each game. “It’s symbolic of the concept of everyone getting in the canoe and paddling in the same direction,” Coach Bala said.

Kalama agreed that one of the main things for them is to not individualize, but to practice as a team. “An advantage I think we have is how close our team is,” she said.

“We do everything the same, together,” Coach Bala said. “We dress the same, get on the court the same, everything, the same.” This is the team’s first year using practice uniforms, which is just one part of the emphasis on unity.

Kalama said that the pre-season tournament is one of the many small steps they will be taking to reach their ultimate goal of winning a state championship.

Coach Bala said that the girls spent one entire Saturday practice working out all of the goals they will have to reach to lead up to their ultimate one.

Teams were originally scheduled in both of the school’s gyms for Thursday, but some teams pulled out of the competition late, so the games were re-shuffled, and the middle school gym will be used only on Friday and Saturday.

Click here for the current schedule of the 2011 Maui Invitational Tournament.