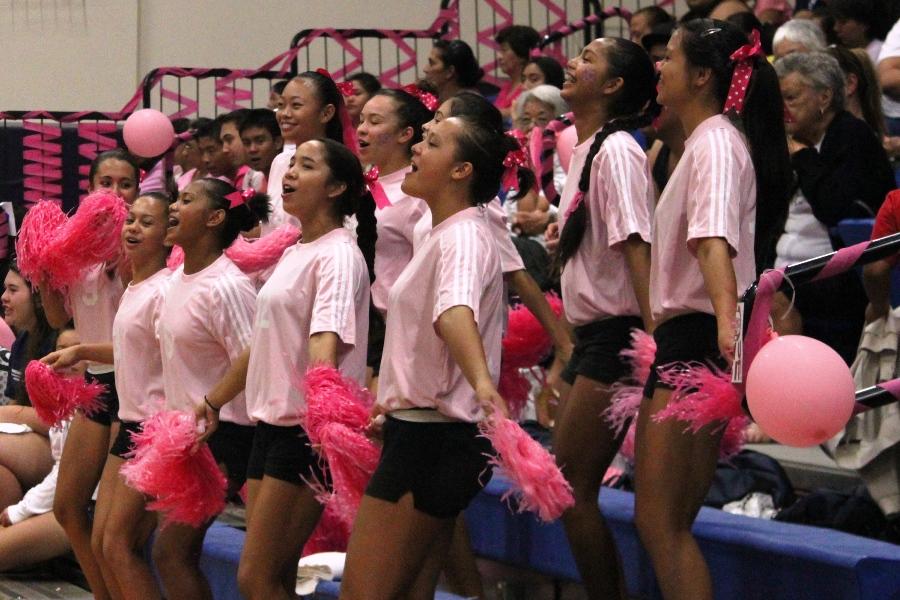 The KSM girls volleyball team won their 51st consecutive match and broke a nearly 20-year record tonight when they played against Maui High School in Ka’ulaheanuiokamoku.

The gym erupted into shouts of celebration, the girls were honored with lei, and the local paparazzi (friends and parents) snapped lots of group photos of the record-breaking team when it was all over. The Maui News was also on hand to record the historic event.

The Kamehameha Schools Maui varsity girls volleyball program has not lost a regular season Maui Interscholastic League game since the end of the 2007 season. This record had been standing for 18 years since the Maui High Sabers won 50 straight games from 1989-93.

Tonight was also the Dig Pink game to support and fundraise for the Side-Out Foundation and honor survivors and victims of breast cancer.

The gym was decorated with pink balloons and streamers and posters promoting breast cancer awareness. Parents sold pink cupcakes, athletics sold special edition Dig Pink t-shirts and attendees could honor a survivor or someone who battled cancer on the Wall of Honor.

There was also a guest speaker, an informational table, rubber writstbands, Dig Pink hand towels, and temporary tattoos for all to enjoy.

Beyond it all though, there were still games to be played and records to break, so at 6:00 p.m., the girls began their first set.

The Warriors got off to a good start and gained a 15-5 lead very soon into the set. They struggled with their hitting accuracy, resulting in a few errors. They had a 24-13 lead and let MHS gain three points on them before they could finish the set. A kill by junior Sienna Davis won them the set 25-16.

While the Warriors managed to get a lead early on in the second set as well, the Sabers only kept them to a four-point lead or less. The Warriors faced a minor setback with their communication. The problem was that either there were too many people going for the pass, or nobody was.

The team’s confidence seemed to be dwindling, but powerful hitting by juniors Sienna Davis and Anuhea Ka’iaokamalie turned that around. Once they had a 17-11 lead, they eventually won 25-15.

The third set meant another early lead with the score at 9-4 at the first time out. KSM faced a new problem- avoiding the MHS blocks. Maui High seniors Kiki Navarro and Ruby Pagdilao also gave the Warriors a hard time on the serve receive side and both had three-point service runs.

Impeccable hitting in the middle by junior Raven Poepoe brought the score up to 21-17. The Warriors won the set 25-21.

They instantly gained a three-point lead. Good serving from the entire team and three aces by freshman Tiare Laufou helped them get to a 19-12 lead. Towards the end of the set, the Warriors had multiple hitting errors, and it was difficult for them to finish the set, but they got the win in the end.

KSM also had an early lead in the second set with the score at 5-1. It was back and forth from there, and the score was tied at 13-13. Hitting errors and poor communication by the Warriors brought the score to a close 24-23. Both teams rallied for the last point, but the Warriors won the set. (See a video of the game-winning point by clicking here.)