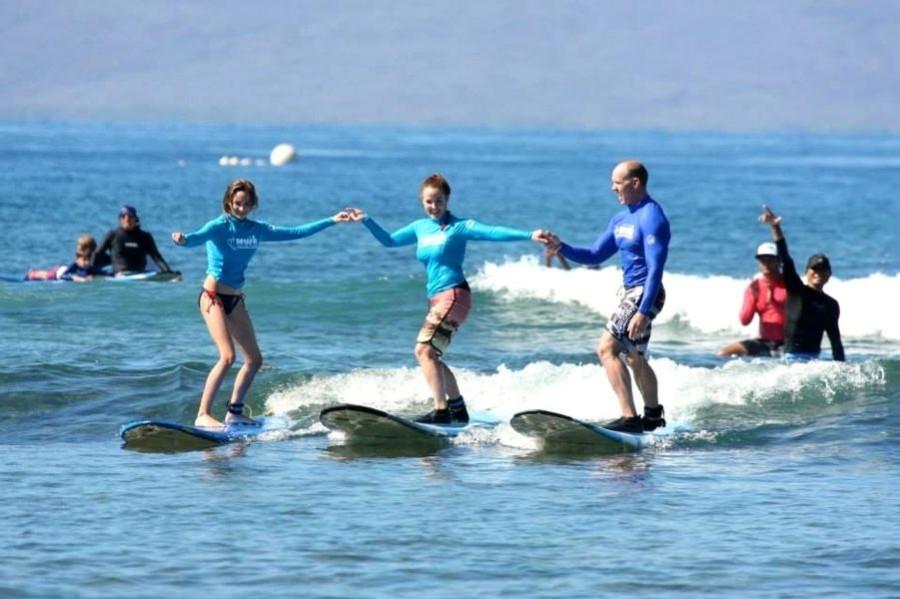 Tourists from Maui Wave Riders catch a little wave out at Breakwall in Lahaina.

Trying something new takes a lot of guts. Whether its baseball, cooking, learning a new language, diving, sculpting, skateboarding, and, here in Hawaiʻi, surfing. It’s a challenge.

Surfing has bloomed into a sport for all ages, with more and more people eager to discover their limits.

Of course, kids pick up on things quickly. Plus, they can get away with much more out in the water, without having to worry about one uncle ready for yelling at him for cutting him off.

Adults, on the other hand, who have never surfed before have much to worry about (especially those uptight locals).

But as long as they learn some basic surf etiquette, they shouldn’t worry. It’s never too late to give surfing a try.

My dad is a surf instructor at Maui Wave Riders in Lahaina, so he has seen it all, from the funniest, weirdest, most crazy students who have taken on the challenge to learn the sport of the Hawaiians!

As simple as it may sound to us, the goal for them is to just stand up and catch a wave, big or small, it really doesn’t matter.

“The amount of excitement they have after one wave is crazy, and makes my job fun,” my dad said.

But out in the ocean, there are so many obstacles to worry about…including the other person that may be riding that same wave.

“When they stand up for the first time, they usually just go where the board goes, and sometimes that board goes right into the other student riding beside them, and next thing you know, they’re on top of each other, but it’s all a good laugh in the end,” my dad said.

He remembered one time when it was so shallow, and the tide was so low, that a little child rode the wave all the way onto the beach without jumping off. It was funny because once the board’s fin hit bottom (the sand), the boy went flying forward, but caught himself before a face plant.

So if you’ve built up the confidence to give it a try after watching an old clip from The Endless Summer, the time may be right. If you’re an adult starting from scratch, I give you a lot of credit. Get out there, and get up on that board. Remember though, look out for those uptight locals!