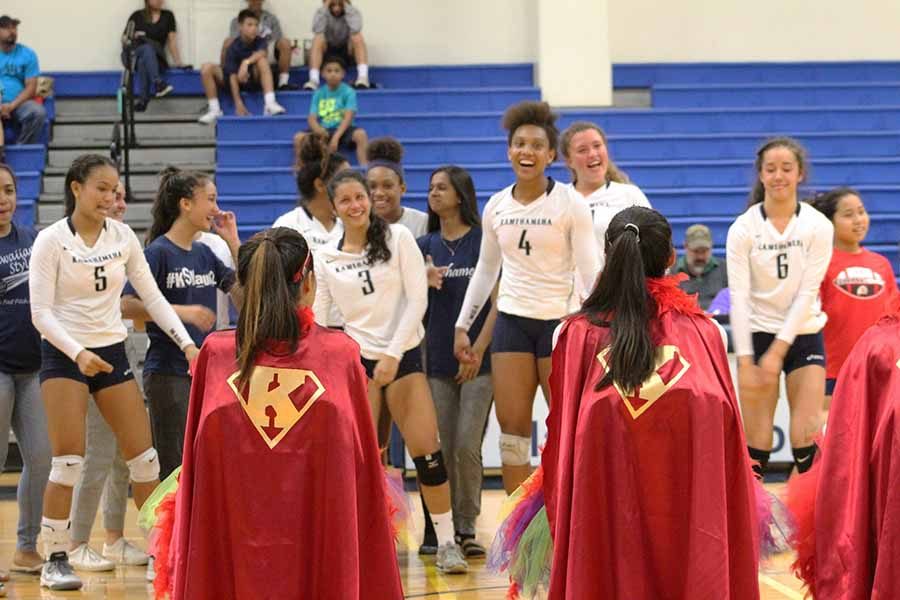 Underclass girls volleyball dances before senior teammates after their senior night game on Tuesday, Oct. 4. The Warriors were defeated by King Kekaulike, 3-0.

Na Ali’i scored the first point of the second set, but early on the Warriors led. When the scores tied at 7-7, King Kekaulike passed Kamehameha and quickly accumulated points, winning the set, 25-14.

The third set was an intense point-for-point match-up as the Warriors scrambled to stay in the game, but in the end, Na Ali’i surpassed the Warriors and won, 25-17.

The Warriors led most of the way, but toward the end, Na Ali’i blocked multiple spikes that the Kamehameha girls were sending their way, and the game ended with King Kekaulike winning all three sets, making them 3-0 against the Warriors on the season.

The night ended with the seniors running onto the court in capes being cheered on by their teammates and the cheerleaders. The seniors on the team this year are Kylee Yamashita, Kayla-Jane “Kayla” Kanemitsu, Mei Ling “Lana” Brown-Chong Kee, and Caylee Tuzon.

Some of the junior volleyball girls made speeches to honor their soon-to-graduate teammates.

Emotions ran high during this bittersweet time as everyone paid tribute to the seniors on the heels of their third loss of the season. The ceremony ended on a high note with the KS Maui volleyball girls dancing for their seniors.