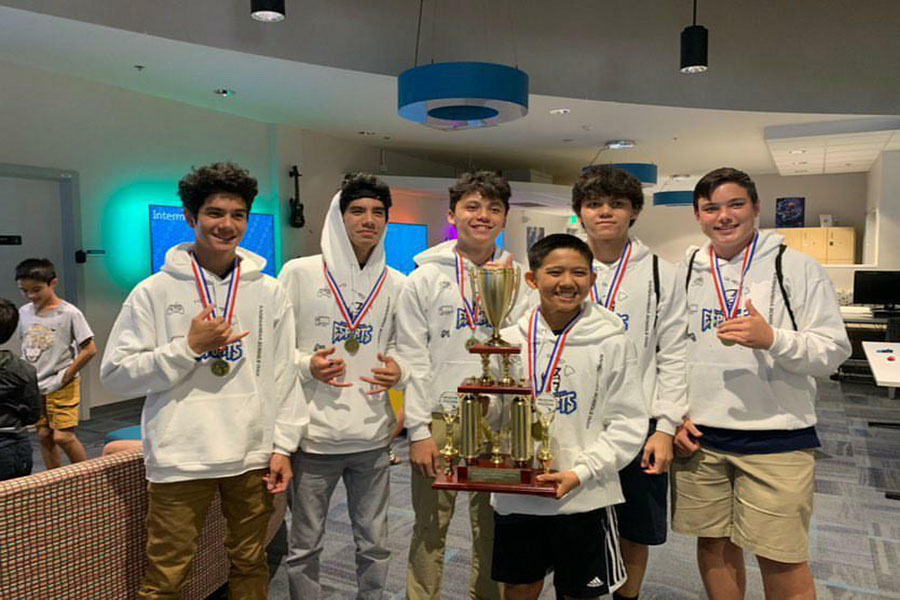 The spring season for esports starts on February 17, and the coaches are looking for more players to fill their rosters for Rocket League and League of Legends teams.

Rocket League is a game where you can play against other people online in 1-on-1, 2-on-2, and 3-on-3 soccer matches in high-powered rocket cars. The KSM team plays 3-on-3 against other schools.

Kamehameha Maui won the HHSAA fall season esports tournament for Rocket League, one of three games in the tournament. The Rocket League team went undefeated with 9 wins and 0 losses.

Although regular season is played virtually from campus, Isaiah Auweloa, Jonah Walker, Jayden Walker, Brenden Hanada and La’akea Golis went to O’ahu to compete in the state championships at the Hawai‘i Pacific University Esports Arena in the Aloha Tower.

“It was a pretty huge deal to me that we made it to the championship as well because it means work that you put into something actually pays off,” Auweloa said.

“I thought fall season went very well.  It was a little rough at first, but things started to work out after the first couple weeks. For our Rocket League to win the championships was more than I could ask for,” coach Brenton Kimoto said 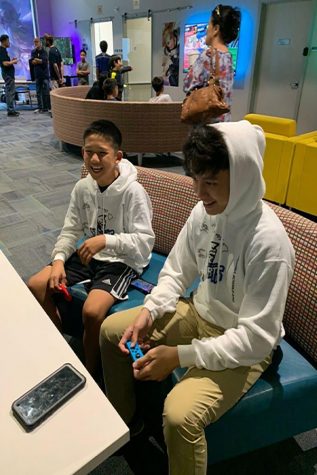 Photo by courtesy of Ms. AuweloaBrenden Hanada and Jonah Walker play on a Nintendo Switch at the Hawai’i Esports arena

This is the first full season of HHSAA esports competition after a limited pilot season last spring.

Currently, 16 out of 126 high schools in Hawai’i participated in the fall esports season, but there are over 50 schools on the waitlist to join, according to a Sept. 23 HHSAA press release.

“I think incorporating esports into other schools should happen because it would be fun to challenge other schools, and perhaps more people would recognize esports as a fun sport,” Hanada said.

As of now, esports is not officially sanctioned by the Hawai’i High School Athletic Association, but they have partnered with PlayVS, which has established itself as a high school sports league, and the HHSAA is facilitating the introduction of this new type of student competition in Hawai’i schools.

The other two games at the first state championships were League of Legends and SMITE.

Currently, there are not enough people signed up for League of Legends to form a full team, so they are looking for those who are interested in playing for the school.

League of Legends is a Multiplayer Online Battle Arena (MOBA) set-up that pits five players against another team of five on a virtual battlefield with a top lane, a middle lane, and bottom lane, and a jungle

The game is won when one team destroys the other team’s Nexus, which is the heart of each team, but towers called turrets are scattered around the map to defend against the opposing team as they try to get near the Nexus.

There are five roles: marksman, support, jungler, solo lane, and mid lane. Each role is important in its own way.

The marksman, or Attack Damage Carry (ADC), is meant to hit an opponent quickly from afar with the help of a support player who deflects damage away from the ADC to protect and preserve the ADC’s health.

The jungler will roam through the jungle on the map, killing monsters and gaining experience points (XP) for the team. The jungler will travel from lane to lane to assist other players who need it.

The solo lane, or the tank, will be in the top lane of the map with the goal of stunning the opposing ADC to get close enough for a kill. The tank is also used to soak up a lot of damage for the team since anyone in this role has a large health pool.

The mid lane, or Ability Power Carry (APC), is similar to the ADC but plays in the middle lane of the map. Unlike the ADC, the APC doesn’t need support to stay alive and can help players in other lanes if needed.