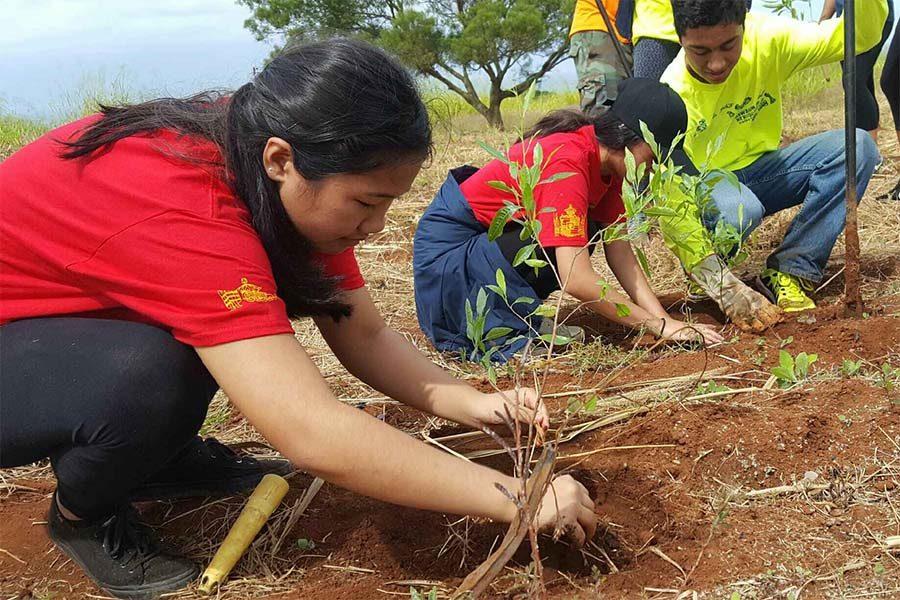 Sophomores Sherri Nagamine and Brennan Mendez plant ʻaʻaliʻi in the holes they dug. Other students worked on clearing weeds at the sophomore class huaka'i Oct. 28.

While freshmen, juniors and seniors enjoyed a day of nā pāʻani Makahiki, Papa ʻAʻaliʻi traveled to Puʻu Kukui Watershed Preserve Friday with a plan to restore their namesake native plant there.

The ʻaʻaliʻi is known to be a strong-centered shrub, smaller than most native plants and trees. ʻAʻaliʻi is used in many sayings to describe steadfastness as in, “He ‘a‘ali‘i au ‘a‘ohe makani e hina ai,” which translates to, “I am an ‘a‘ali‘i shrub; no wind can push me over.”

As freshmen, the class of 2019, now sophomores, received the name of Papa ʻAʻaliʻi to describe their class’s ability to stay together with endurance and be the foundation for upperclassmen.

Prior to the sophomores’ huakaʻi to Puʻu Kukui, the class officers of Papa ʻAʻaliʻi had done a test-run wherein they visited the watershed to decide if the class should make the trip.

“Once the class officers made a connection with restoring the ʻaʻaliʻi plant, they just took off from there and planned the whole trip for their class,” said Ms. Noelani Yatsushiro, English 10 teacher.

After hiking their way in, the sophomores split into two groups. One group planted ʻaʻaliʻi, while the other group cleared overgrowth where weeds were suffocating ʻaʻaliʻi plants. Later, they switched.

“Rather than bulldoze the area to clear it out, kill all the plants along with the weeds, they go in with sickles and cut out the grass and find the plants. Almost like a treasure hunt,” Ms. Yatsushiro said.

Papa ʻAʻaliʻi worked hard, but the day came to a close, they chanted ʻoli mahalo and came back to KS Maui.

“There was very little kumu instruction. It was all the alakaʻi of the class that organized this trip,” ʻIke Hawaiʻi teacher Kumu Kehau Lucas said.

Feeling accomplished, Papa ʻAʻaliʻi can’t wait to do more for the Hawaiian community in the future as their huakaʻi to Puʻu Kukui Watershed was a success thanks to their class alakaʻi.