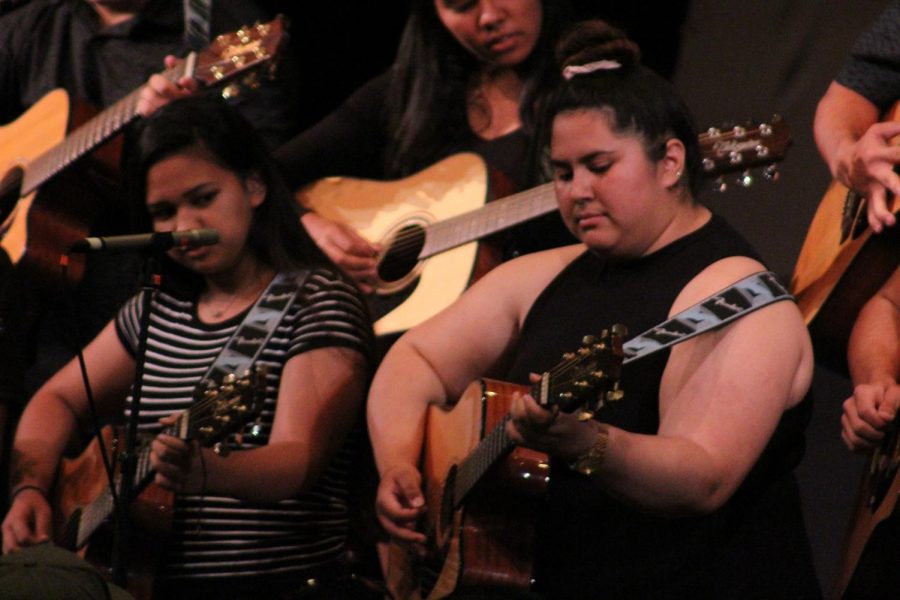 Senior Natalie Warrington plays guitar with the rest of the Guitar 1 class at the spring concert, May 10, in Keōpūolani Hale. The annual concert showcases the work of students in various performing arts classes.

The concert gave a chance for haumāna to show off what they have learned throughout the year in various pieces arranged by Kumu Kalei ʻAʻarona, Kumu Henohea Kāne and Mr. Dale Nitta.

“The kids worked really hard, and for some of them, that was the first time they’ve experienced that level of playing, so a lot of nerves,” Kumu Kalei said.

The spring concert was a perfect time to show off their arts skills and go through a performance experience.

With Kumu Kanani as emcee, the night flowed with a comforting and fun environment for the audience.

Haumāna presented numbers from diverse music genres. A few of the melodies were “Under the Boardwalk,” “Honolulu Baby” and “Nō Uka Ke Aloha.”

Both Ka Pā Hula O ʻAʻapueo and Hawaiian Ensemble seniors celebrated their years’ worth of hard work, but also their time as part of these school clubs.

“After dancing in KPHOA for the past three years, my time has officially come to an end,” senior Breanna Purdy said. “From being part of KPHOA, I’ve gained a family and got to create amazing memories.”

Underclassmen in both Hawaiian Ensemble and KPHOA hung posters for each of the seniors in the hale. After the concert was finished they recognized the seniors with lei.

“Now that it is time to graduate, I feel sad that I will be leaving all of my sisters and brothers but I know that the future has great things ahead,” Purdy said.