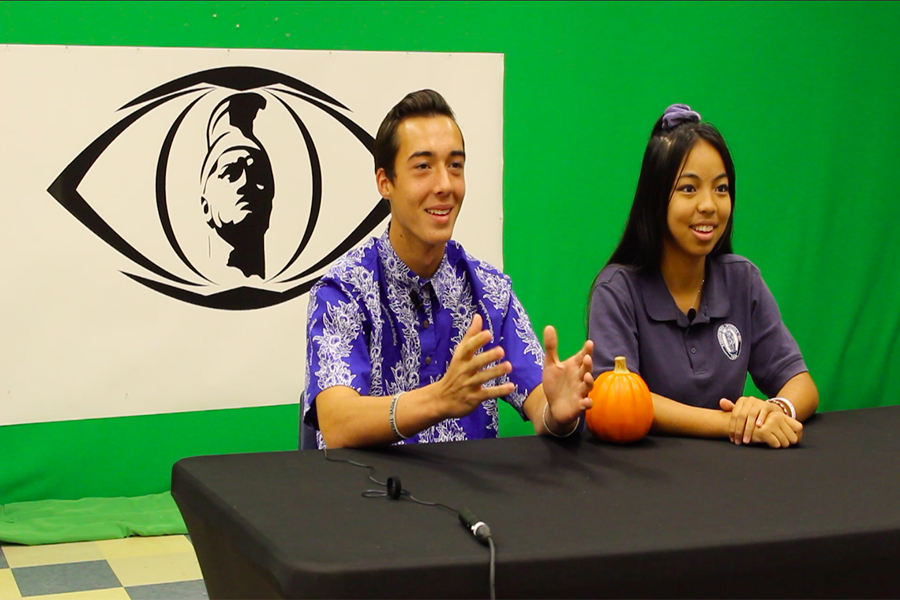 Gabriel Arcas and Raelynn Yoshida host the morning broadcast, Friday, November 1. The hosts of the show vary from week to week, and others who have hosted include Sofia Stupplebeen, Max Bielawski, Pearl Bachiller, and Ethan Fisher, with senior Marie Abihai making regular appearances to do the morning devotional and prayer.

“Ka Maka Koa gives you that opportunity to try and–whether you’re in the front or in the back–give you some experience. Maybe it’ll spark something else,” adviser Kumu Lōkahi Antonio said. “We wanted something that was not just gonna be the ordinary thing. We want to talk about and show, discuss things that would make you stop and think.”

At the urging and with the input of students, Kumu Lōkahi, teacher Mr. Kaholo Rickard and post-high counselor Ms. Lisa Correa helped create and form the idea of the broadcast. The identity for Ka Maka Koa, meaning “the brave face,” is revealed in their logo, which says “Bold. Fierce. Visionary.”

Kumu Lōkahi said that the words serve as a reminder of the mission and direction of the endeavor.

“Being a part of the broadcast production team should have you thinking outside of your comfort zone, pushing yourself to new places that you didn’t think you could go,” Mr. Rickard said.

Through the extra-curricular program, select students from grades 9-12 who have expressed interest and demonstrated commitment learn about video production, film and broadcasting outside of the school’s media and literary arts endorsements. Many of the students involved have experience from being on the award-winning video production team in the middle school or from their participation in the middle school morning broadcast.

The students and their advisers look at the program not only as an organization that can stand on its own merits, but also as a possible stepping stone into the upper level Nā Koa Media programs, Whatʻs Up Warriors and Ka Leo o Nā Koa, that are currently in place.

“I’ve learned about broadcast in general,” sophomore director Sean “Aimi” Sakamoto said (see related “Lights, Camera, Action”). “Besides that, I’ve learned to think quickly and improvise, but also to be detail-oriented and patient.”

Students take on different positions and roles and deliver segments, both live and recorded, along with the high school daily bulletin announcements. The broadcast begins at 8:20 most mornings on the Ka Maka Koa channel on YouTube. Past episodes are also available there in their archives.

“I like mostly the segments because it’s always interesting…I also like when it says what lunch is because it’s very informing,” junior Tianna Lopez said.

There are many plans for the future of the broadcast.

“I hope that we can continue to evolve the broadcast successfully and effectively with students who are motivated to be a part of a live broadcast environment,” Mr. Rickard said.

Ka Maka Koa has also launch Ka Uila Sports, a sports broadcasting arm, in order to stream live athletic events. So far, Ka Uila has aired one trial broadcast available to a limited audience followed up by a successful livestream of an entire varsity girls volleyball game, complete with commentating and color.

The multi-camera production even included updated scores in the lower third of the screen thanks to the programming talents of sophomore Jaxson Pahukula. Click here to view them in action.

In its first year, the program has been well-received with most students watching every episode, but it also has its critics.

Despite some criticism, the team remains steadfast and optimistic about giving students an opportunity to engage.

Kumu Lōkahi said that the staff is challenged to “just do things out of the ordinary because many times here on campus, it almost seems as if we censor ourselves, that we might not bring up issues that might make us a little uncomfortable.”

Also in the future of the Ka Maka Koa team, said Kumu Lōkahi, is that he “would like us to step out. Not just step out of that proverbial box, but step off of campus too. …We are part of the community.”