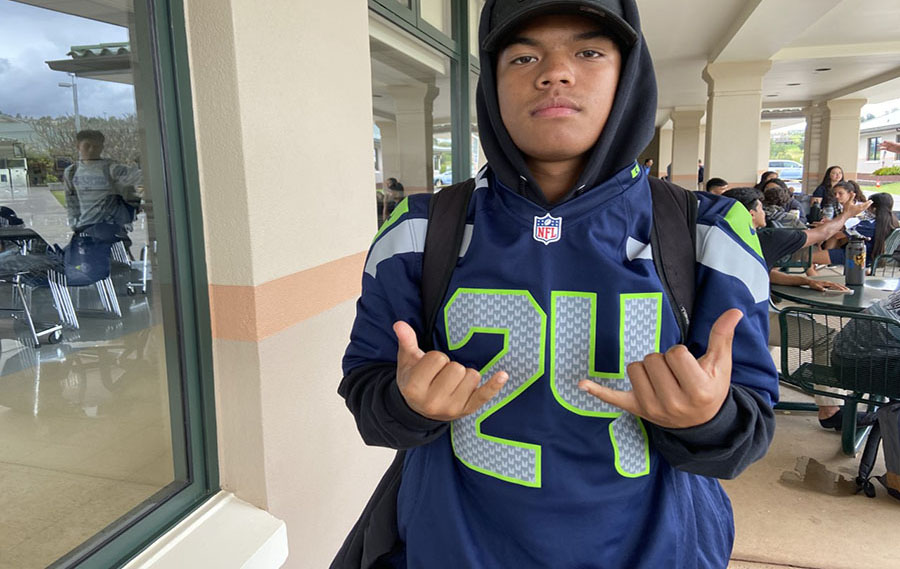 This week is Spring Spirit Week, with the theme this year being seize the moment. Students on Warrior Sports Wednesday were encouraged to come to school wearing their favorite sports team attire.

Students wore everything from football jerseys to baseball t-shirts and in-line skating outfits. I asked a few about their choices.
Coian Hett
Junior Coian Hett said he brought his Marshawn Lynch Seattle Seahawks jersey to school because his mother had given it to him as a gift on Christmas.

“My favorite player right now on the Seahawks is Russell Wilson, the quarterback,” he said.

Hett, who surfs, paddles and hunts himself, says he has been a Seahawks fan for over 3 years. 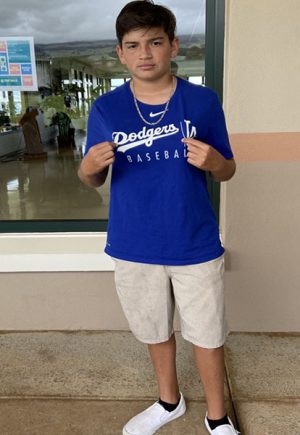 Photo by Max BielawskiFreshmam Kainoa Gates shows off his Dodgers t-shirt after enjoying a Jamba Juice smoothie outside of the dining hall during flex block.

“The Los Angles Dodgers are my favorite team because all of my family are fans. I’ve practically been a fan since I was born,” Gates said.

His favorite memory with the Dodgers is when he attended a home game back in 2019 with his family.

“My favorite player on the Dodgers is Joc Pederson,” he said.

Gates also plays baseball. He says he likes baseball because he grew up with it and his dad played baseball in high school.
Keolapono Keahi
Junior Keolapono Keahi decided to wear a paddling t-shirt. The shirt is about “The Molokaʻi Hoe,” a 42-mile race from Molokaʻi to Oʻahu. 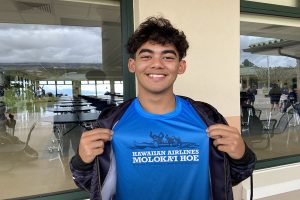 Photo by Max BielawskiJunior Keolapono Keahi shows off his Molokaʻi Hoe t-shirt, showing his love for the sport of paddling.

According to the Molokaʻi Hoe website, “Each year over 1000+ paddlers from around the world compete in the Moloka’i Hoe, the men’s world championship in outrigger canoe racing.”

“I wore the shirt because paddling is my sport, and it’s a part of me,” Keahi said.

Keahi’s favorite memory of paddling is when he first learned how to steer a canoe.
Naliko Cabanilla 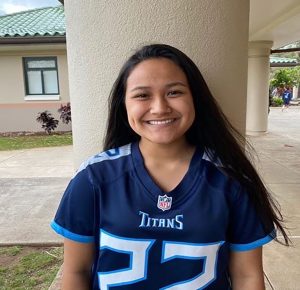 Photo by Max BielawskiSophomore Naliko Cabanilla shows off her Tennessee Titan’s Derrick Henry jersey, showing off her dedication to her favorite sports team.

Sophomore Naliko Cabanilla wore a Tenesse Titans jersey. The player on the jersey was Derrick Henry, running back for the Titans.

“My mom and I have been Titans’s fan ever since [Marcus] Mariota got drafted by the Titans,” Cabanilla said.

Even though Mariota got her interest in the team, Henry is her current favorite after his dominant season leading the NFL in rushing yards and shattering records later in the post-season.

After a casual, sporty day, students participated in a kickball tournament during the flex block at the end of the day. They were also able to purchase Jamba Juice smoothies for $5 during that time.