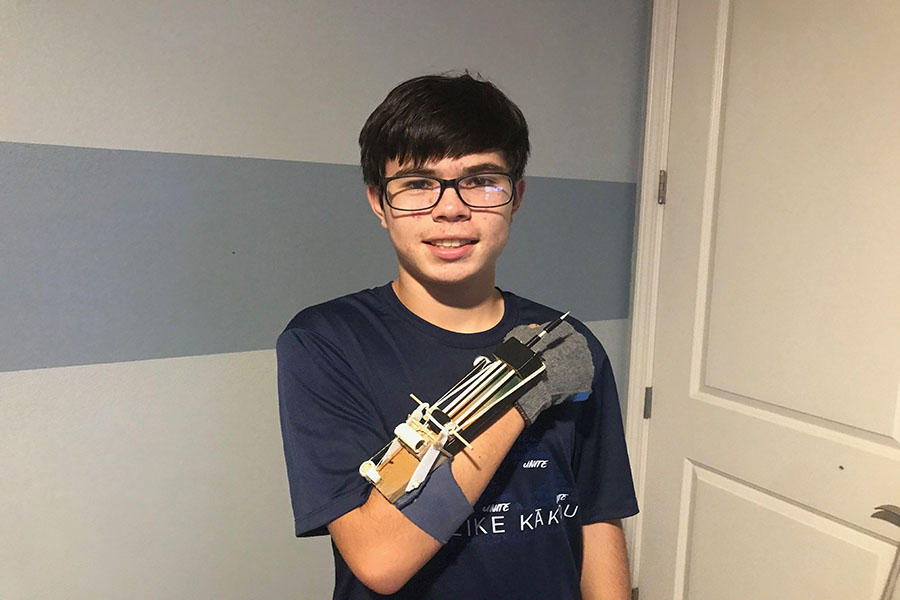 Jaxson Pahukula and the wrist-mounted skewer launcher he prototyped while isolating at his house during the COVID 19 quarantine. Pahukula enjoys building and engineering in his spare time.

Sophomore Jaxson Pahukula is using his free time during the COVID-19 quarantine to create different inventions.

“I’ve been making things ever since I was a very little kid playing with Legos,” he said, “but as I am growing up, I’m learning how to move onto bigger projects.”

He has made a plethora of things during isolation, but the one he is most fond of is a “wrist-mounted skewer launcher made from scrap wood, PVC, and an old garden glove,” he said.

His inspiration for such ideas came from YouTubers like Wintergatan and Mark Rober.

“The stuff they make is cool, and maybe I can get there someday,” he said.

In the past, Pahukula has experimented with many projects, from painting Nerf guns to making video games. He’s made a mini fountain, marble track, head massager, mini trebuchet, ping pong ball dispenser, combustion-powered Nerf gun, and a spud gun.

He also participated in Lego robotics for four years with a community team called the Wailuku Warriors. They competed in the first Lego League tournaments in the state.

Lego robotics requires the members of the teams to complete various tasks only using coding, but the Lego robot could also be modified with attachments.

“It gave me another platform to gain more experience tinkering and making stuff,” he said.

While others have taken up gardening or started working out regularly to deal with the boredom of the quarantine, Pahukula has been busy fabricating.

“Right now, it’s a hobby, but I hope that by investing a little bit of effort over a long time, it can manifest as something bigger,” he said.