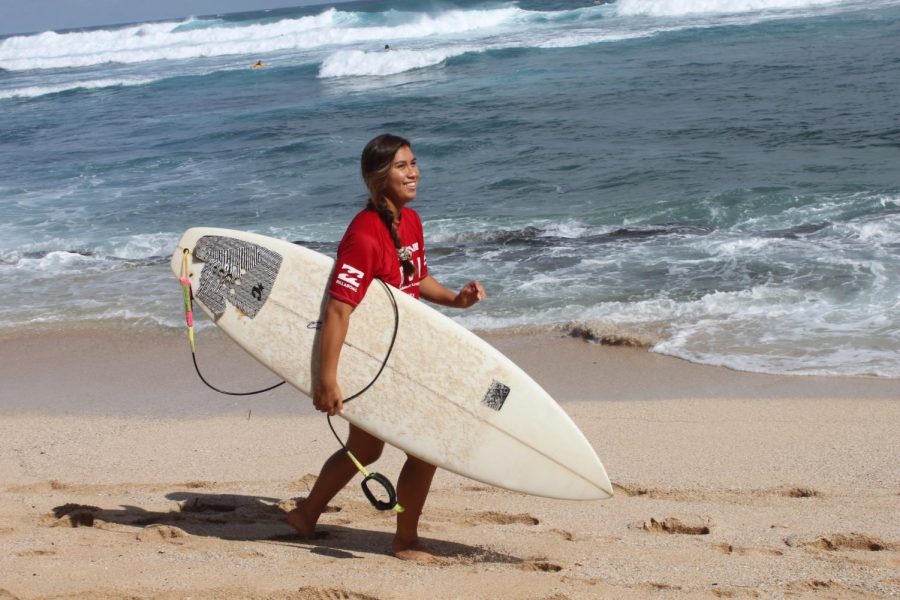 Photo by Courtesy of Kamalei Roback

Senior Kamalei Roback carries her shortboard after competing at the MIL championships in 2017. This year she placed second in girls bodyboarding at the championship meet.

Regardless of the weather, seniors Kamalei Roback and Kahiau Luat-Hueu bodyboarded their way to second place and represented the Warrior spirit in the Maui Interscholastic League championship surf meet.

During the regular season, the Warriors averaged a fourth-place team standing for boys and third-place standing for girls.

Luat-Hueu and Roback helped keep their team competitive with their individual bodyboarding scores contributing to the team scores. Luat-Hueu earned a total of 2,556 points, and Roback accumulated 2,439 points.

“We had weekly workouts with Coach Kevin O’Brien that pushed [us] to strive for greatness,” Luat-Hueu said.

The MIL season consisted of four meets, which the Warriors prepared for with once-a-week dry-land training and 2-hour surfing sessions after school.

Most of the surfers, including Roback and Luat-Hueu, surfed on weekends to put in extra practice time.

“I surf as often as I can,” Roback said, “[but] sometimes I have phases where I don’t want to surf, and I’ll not surf for like weeks at a time.”

Roback didn’t let those feelings get to her. She found motivation in the ocean.

“I love surfing because of the feeling you get after you get a good wave. The feeling is indescribable,” Roback said.

“One of [Roback’s] greatest traits is that [she] likes to charge,” head coach Kekaula Campball said when recognizing her as the Most Outstanding Player for girls surf at the annual Athletic Banquet, May 15. “She can ride anything in the water.”

Besides bodyboarding, Roback competed in shortboard, in which she totaled 1,850 points, placing her in sixth in the final MIL standings.

“I started off the season slow, especially for surfing,” Roback said. “I wasn’t advancing and making heats until halfway through the season, but for bodyboarding, it was a different result.”

For Luat-Hueu, it was different. His MIL surfing season started with a win at Fleming Beach Park.

“After winning the first competition at [D. T.] Fleming [Beach Park], I knew that I had a chance at the podium,” he said. “After that meet, I really started working harder.”

In the second meet at Koki Beach Park, Luat-Hueu fell behind the top nine standings.

“I took a downfall at Koki, but that only fueled me to do better at the next meets,” he said.

After the second meet, Luat-Hueu’s performance improved. He placed fifth at Lahaina Harbor and second in the MIL championship meet at Hoʻokipa Beach Park.

“[Luat-Hueu] was the epiphany of hard work,” Coach Campbell said. “He put in the time and effort.”

He was awarded the boys Most Improved Surfer award and a brand new Manuela Shapes surfboard for his hard work and dedication.

“I want to thank both [Luat-Hueu and Roback] for being good role-models and examples for the underclassmen and helping build our program for the future,” Coach Campbell said in the banquet awards slideshow.

Although there isn’t an HHSAA state competition for the surfers, they were well represented at the MIL meet and in the final standings.