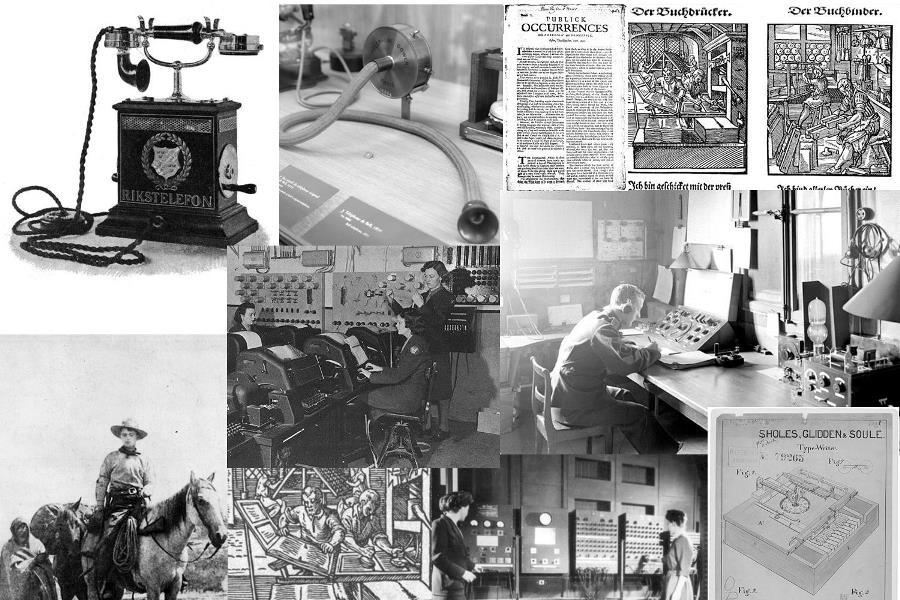 Communication and distribution of information has changed so much over the years with the evolution of technology.

With the help of technology, the efficiency of sending and receiving information has progressed from cave drawings to instant messaging.

Now, information-seekers have literally thousands of ways to get answers, from conferencing in video calls, to searching hashtags on social media, and to watching just about anything on mobile devices from the comfort of a home or remote location, but it wasn’t always like that.

Ancient Romans had their Acta Diurna, or daily acts, which were the first newspapers. However, these were not written on paper, but rather stone and metal, and they included a lot of what is seen today in newspapers: military victories, sports (gladiatorial bouts), birth and death notices, and human interest stories.

For the most part, though, people continued to receive information by word of mouth, hand-written or hand-copied letters and manuscripts, or limited-run works printed on early printing presses until Johannes Gutenberg invented a superior mechanical movable printing press  in the 1440’s, and the possibility for spreading information took a quantum leap forward.

By the early 1600’s several cities in Europe had weekly newspapers, and not long after, in 1690, America got its first newspaper, Publick Occurences.

Within a century, American newspapers were being printed daily, and the public was clamoring for more and more information. In the 1830’s, homing pigeons and the Pony Express brought news and printed materials to remote locations across a quickly growing United States of America. The Pony Express was made up of postmen who rode horses to deliver mail along pre-set trails. They went from city to city and state to state cross-continent.

During the same time, the telegraph was invented by Samuel Morse. Users communicated through electrical signals, and its invention also led to the creation of the Morse Code.

Then in 1876, Alexander Graham Bell, with the help of Thomas A. Watson, created the telephone ,which seemed impossible at the time. No one thought the human voice could be sent from one end to another through wire.

It didn’t take long before people were searching for ways to use the technology to send pictures as well, and the work of Harry Nyquist with the American Telephone and Telegraph Company led to a primitive  fax machine that could send black and white images over the wires in 1924. The very first images faxed were 5 x 7 pictures that took seven minutes each to transmit.

These are some early ways that information was spread, but all the technology also created a need to store the information.

Whether storing sheets of animal skin or scrolls of papyrus, the Royal Library of Alexandria, Egypt, is largely considered the first library, where scholars could visit to read, borrow, or copy information from the large collection of works housed there.

The library continued to be the primary place for students to obtain information. Generations of students were taught to use catalogs to locate books, but instead of the convenience of today’s online catalogs, library users would have to dig through index cards filed in boxes or drawers. Librarians were responsible for using this system to keep track of all the books.

It was neither as fast nor as efficient a way to obtain information as a well-phrased Google search today. In 1992, for example, the University of California system had approximately 25.7 million volumes in their collections. By then, UCLA had been digital in part for ten years, but Miki Goral, Reference and Instruction Librarian at UCLA’s Powell Library, said that they continued to used the card catalog “for a number of years before it was dismantled.”

She also said they “still have a book catalog of the UCLA Library that was published in 1963 and sometimes items are found there that cannot be found in [their] current online catalog.” Can you imagine looking for a single book using a card filing system? In contrast, when I asked Google, “How many books in a library?” the search returned 838 million responses in about a half a second.

As everyone knows, eventually, the computer changed nearly everything about how we access information.

In 1946, the first electronic general-purpose computer was announced, according to History.com’s article entitled “Invention of the PC.” It was called the Electronic Numerical Integrator Analyzer and Computer or ENIAC, also known as the “Giant Brain” because it weighed 30 tons and covered 2,00 square feet. ENIAC cost around half a million dollars and required a team of engineers and specialists to run.

While the ENIAC was good for performing complicated mathematical problems, it didn’t “talk” to any other computers.

So finally, in the late 1960’s, the Internet was born, and the world began to change rapidly. The Internet began as a way for computers to communicate with one another, and it wasn’t even known as the Internet at that time. It was known as ARPANET. After years of evolution, it brought forth the Internet that we use today.

Meanwhile, the computer was evolving as well and finding its way into homes and schools. The Pew Internet Project Report said that a 1983 Louis Harris & Associates poll showed 10% of Americans had a home computer. That percentage went up to 42% in February of 1990 and now is at 81%.

Technology used for communicating information continued to grow throughout the end of the twentieth century, and on September 21, 1983, Motorola unveiled the world’s first commercial portable cellphone called the 8000x. It was said to cost consumers $3,995 at the time, a little less than half the average cost of a new car.

But, computers were still the only way to access the Internet until cellphones evolved, too.

In 1992, the first smartphone named the Simon Personal Communicator, or just Simon, was created. It could receive and send calls, access email, and act as a personal data assistant, which helped define smartphones at that time. The PDA stored personal information, like contacts and appointments.

The Simon went on sale to the public in 1994, but it was doomed. It encountered setbacks, like terrible Internet connections and problems with  battery life. The Center for Innovation Management Studies said that at that time, “There wasn’t enough of a technological ecosystem in place to support it.”

With improvement to the infrastructure and protocols of the Internet, practical “smartphones were introduced in mid-2007 with the introduction of the iPhone,” according to the Pew report. iPhones kickstarted other communication tech companies, like Samsung, HTC, Sony, LG, and  Nokia, who were already big in the cellphone/flip phone industry.

The success of the iPhone inspired competitors to develop their own smartphones, and people were quick to accept the latest developments. In a 2011 Pew survey, 35% of Americans already owned a smartphone, and now, 58% own one.

Cellphone ownership in 2014, according to Pew, had also increased from 53% of adult owners in 2000 to 90% in 2014. Out of that 90%, two-thirds said they use their phones for Internet access, and one-third said it was their “primary Internet access point.”

While technology continues to evolve as a means to stay connected and access information via the Internet, it is predicted that users will find it nearly impossible to give up their electronics within a few years.

Were you paying attention? Then try out our technology crossword by clicking the PLAY button below.

This chapter was written by Destinee Murray.