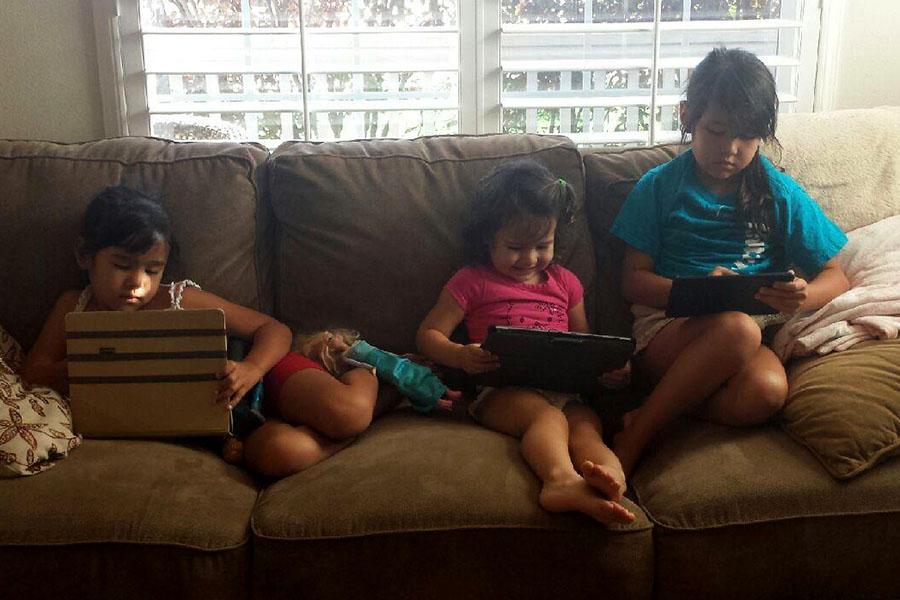 Ava (4), Mailah,(2) and Chloe (6) Cuomo of Kīhei, sit at home after school playing on their iPads, while a more traditional toy, a Barbie doll, waits nearby.

Kids are swapping dolls and dinosaurs for smartphones and tablets.

As the amount of technology continues to rise rapidly, the ages of its users gets lower. New technology is embedding itself in the lives of even the youngest generation.

Move over traditional toys, like basketballs and puzzles, and bring on the more modern “cool” stuff.

According to elementary school students at Kamehameha Schools Maui, that would be iPads, cellphones, and Kindles.

That wasn’t the only thing they said. For some, the answers were slightly different.

“I already have those things!” second grader Alyssa Mateo said, referring to having an iPad and a cellphone.

Among American children 0 to 8 years old, 75% have access to some type of mobile device at home, according to  Zero to Eight: Children’s Media Use in America, a 2013 study conducted by Common Sense Media Research. This study surveyed 1,436 parents of children ages 8 and under.

These Millennials have easy accessibility to technologies that were previously considered luxury or unnecessary gadgets to generations before.

With the large amount of technology in their homes, it’s no wonder that kids are more interested and think technology is cooler than other traditional toys, and Apple products are at the forefront of the trend.

The Nielsen Company reported that iPads, iPods, and iPhones were the first, second, and third-most wanted items atop children’s Christmas wishlists in November 2011. Fourth on the list were computers, which also includes Apple products.

But, the undeniable champion of cool technology overall is cellphones.

Though the original purpose of cellphones was purely for communication, their development into smartphones has made kids now want them for fun.

Many debate the wisdom of giving cellphones and smartphones to children so young.

Time For Kids reports that 12 is the magic age, though 13%  of kids ages 6 to 10 already have one, according to a survey by YouthBeat, a youth market report company of C & R Research.

Nearly half of 144 elementary school students surveyed at Kamehameha Schools Maui said they have a cellphone, and of those, 34% said they got their first phone at the age of 7.

Teens are finding that they’re less surprised that the stuff that interests teens also interests younger brothers and sisters.

But the future isn’t all LED’s and microchips.

One group of boys on recess had a different answer to my survey.

“Kids need to get off of electronics and go outside,” third-grader Cade Cagasan said.

When he and his pals were asked what was cool, their answers were soccer, sports and “anything outdoors.”

As things are clearly changing in the world of teens and adults, its easy to see that they’re changing for kids, too.

At the same time, it’s nice to see that some students are still living real life on the playground.