But, are we stuck in the outlet? 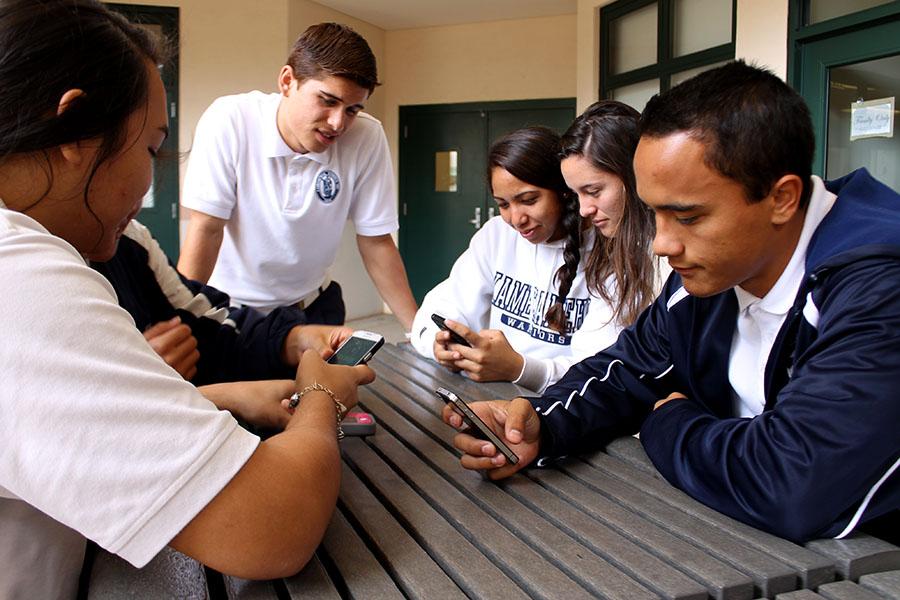 Just like in the video, “I Forgot My Phone,” students at Kamehameha Schools Maui are sometimes too preoccupied with their technology to pay attention to others speaking right in front of them.

Everywhere we go people are on their phones, tablets, and other mobile devices. Though technology has many everyday benefits, its constant presence in every aspect of our lives may be reaching the tipping point.

America may be facing a crisis when it comes to technology addictions.

Thanks to Steve Jobs, Bill Gates, and other media developers, technology is everywhere — in the workforce, in homes and in schools. These technologies have gone from being simple tools used occasionally, to, for some, a lifeline.

People can’t even put their phones down while completing routine tasks like driving, walking, shopping, eating dinner, and even, using the bathroom.

“I think all teens can admit to texting in class” said junior Jaye-lyn Orikasa. “We all do it.”

Students are always bringing out their phones in class, at assemblies, and during sporting events.

“I’m on [my phone] about 70% of the time,” KS Maui junior Rachel Kaulupali said. “Checking Instagram, Snapchat, or just looking to see if I got a text.”

The Pew Research Center reported that for 49% of phone and Internet users, it would be “impossible” to give up their cell or smartphones and “very hard” for 53% of people to give up the Internet.

For many of these people, the Internet and technology have become deeply woven into their routines. For instance, they’ve ditched their traditional alarm clocks for the ones on their phones, they use iTunes to download music instead of actually buying a CD, and Netflix has become the new movie theater.

In short, America has become addicted to technology.

In a 2010 article by Mark Milian for CNN, Apple co-founder Steve Wozniak said, “We’re dependent on it, and eventually, we are going to have it doing every task we can in the world, so we can sit back and relax.”

He has a point. People used to do things manually — mail letters, use maps, and actually, physically, talk to people in person. Now, mail is sent virtually, Google Maps literally tells us where to go, and Facetime and Skype pass for conversation daily.

In comedienne Charlene deGuzman’s YouTube video accompanying this article, she illustrates the problem so well, that her video has now been viewed over 39 million times.

Entitled “I Forgot My Phone,” her video (embedded at the top of this story) shows a series of everyday events in which people’s ordinary and special moments are interrupted by social media and technology. In an interview for The New York Times, deGuzman said, “It makes me sad that there are moments in our lives when we’re not present because we’re looking at a phone.”

Can people truly enjoy events when they’re so busy recording them?

She and a team of researchers identified a condition known as the “photo-taking impairment effect.” Sarah Knapton, science correspondent for The Telegraph, wrote about the study in a December 2013 Web article.

Henkel’s study suggests that taking pictures instead of actually focusing on an event could prevent people from fully remembering details of the event.

“When people rely on technology to remember for them – counting on the camera to record the event and thus not needing to attend to it fully themselves – it can have a negative impact on how well they remember their experiences,” she said.

Other experts chime in on the topic of taking too many digital pictures.

In Michael Sacasas’ post “Living for the Moment in the Age of Memory Abundance” for Second Nature Journal, he wrote, “Gigabytes and terabytes of digital memories will not make us care more about those memories, they will make us care less.”

Despite concerns raised by people like Henkel and Sacasas, tech-savvy people will probably continue to bring out their devices at every memorable moment.

As tech businesses continually come up with new ways for people to take and share pictures, people are going to want try the new gadgets without a glance back at tradition.

Society is already beginning to push back against the trend. Some events provide photographers and videographers, some make announcements about enjoying live performances, and some places even ask people to check phones and cameras at the door.

Rather than waiting for others to tell them to put their phones away, maybe the time is not too far off when Americans will decide for themselves that, sometimes, it’s just time to live life and get unplugged.