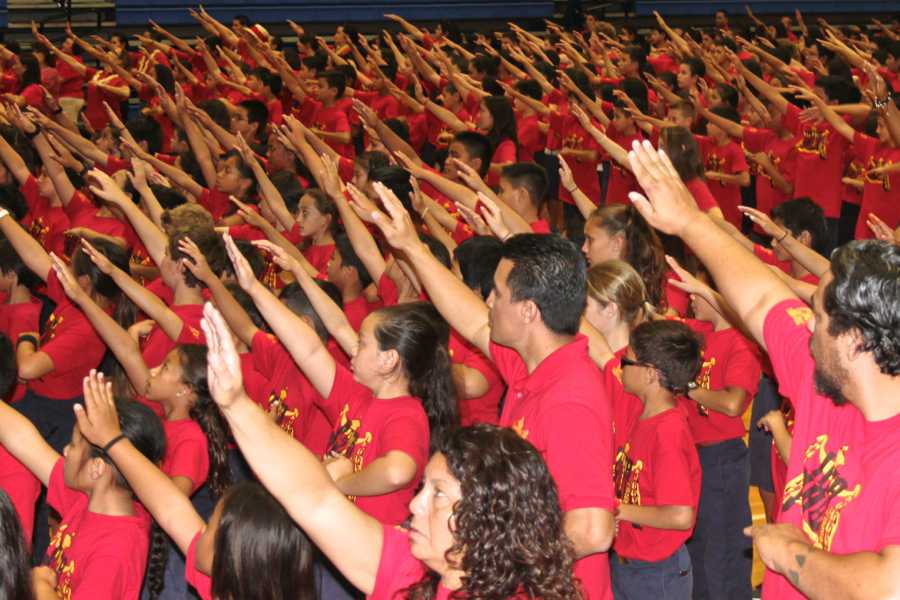 The entire Kamehameha Maui campus, from kindergarten through high school and faculty, hula to “Kaulana Nā Pua,” the song that set the theme for Red Friday , February 6, 2015. After a day of workshops and instructions, students gathered in Kaʻulaheanuiokamoku for the mass hula and kanikapila. (Photo by Ka Leo o Nā Koa)

The entire Kamehameha Maui campus, from kindergarten through high school and faculty, hula to “Kaulana Nā Pua,” the song that set the theme for Red Friday , February 6, 2015. After a day of workshops and instructions, students gathered in Kaʻulaheanuiokamoku for the mass hula and kanikapila.

This year’s Red Friday was supposed to go off without a hitch. Everything was going according to plan, except for one thing: a staggering 102 students were absent from the high school.

“I don’t think a lot of people realized that this Red Friday was going to be so motivating, and learning about different perspectives toward one issue. I think they just saw it as an opportunity to start their weekend early. I knew that people were not going to show up, but the amount of people that did not show up and called in sick was disappointing,” ASKSM president Haliʻa Kekuewa said.

There were 75 students who called into the absent hotline and 27 who were marked as unexcused, according to Ms. Ronnelle Suda, high school office assistant. However, she said, an unexcused absence could simply mean that the student did attend school, but did not check into first block Friday morning to be counted.

I knew that people were not going to show up, but the amount of people that did not show up and called in sick was disappointing.”

“It was unfortunate that a lot of students in the eleventh grade, and some in the twelfth grade werenʻt able to make it that day because they missed out on a lot,” said Ms. Jay-R Ka’awa, academies principal.

Red Friday, which is a day to recognize Hawaiian unity specific to Kamehameha Schools, may revert to an assembly after a day of classes next year, but it could also remain an all-day event depending on the focal point and what the kumu recommend for the theme. Pōʻalima ʻUlaʻula has been conducted both ways in the past, but, Ms. Kaʻawa said, the school will continue to have a Pō’alima ‘Ula’ula event.

After the event, Ka Leo o Nā Koa issued a survey to the four grade levels via www.SurveyMonkey.com. Over a period of two weekend days, 88 students responded; 45 upperclassmen and 43 underclassmen.

Most students, about 60%, reported that they were at Red Friday because it was required or because it was a school day, but many also said they were interested in the topic or attended for the fun and interaction.

Students could report more than one reason for why they attended. In the comments section of this question, many also reported that they came to school because they were involved in athletics over the weekend and would not have been able to play if they were absent. With league championship soccer and basketball games this weekend, the athletes were in full-out attendance.

Of the 88 responses, only five were from absent students. Of those, all five reported that they did not attend due to illness, but they also reported a lack of interest, appointments, and absence of classes as other contributing reasons they weren’t there.

The students who were absent elaborated somewhat on their reasons for the absence, but since none identified themselves, we are unable to provide their comments here per our editorial policy; however, many students who were present had opinions about why so many people were absent.

“I know that a lot of people were absent because they didn’t think that it was important,” senior Bryant Kubo said. “They donʻt feel like learning a hula has anything to do with school or their education. They thought that going a whole day trying to learn one hula was pointless.”

Except for juniors, about 70% of students reported that Red Friday was beneficial.

“[Itʻs mostly just disappointment] that they maybe not recognize why we have Pō’alima ‘Ula’ula and the reasoning behind it at school. Itʻs not to waste peopleʻs time,” vice-principal Mr. Leo Delatori said. “Thereʻs going to be a time down the road when theyʻll reflect back, and they may recognize that they missed this opportunity. It is more for people to learn and to gain a deeper understanding of who they are.”

Another reason behind the huge number of absences was illness.

Registered Nurse Susan Hardesty, the high school nurse, said she has seen a great increase in the number of students who are absent with the cold, flu, and respiratory illnesses this year over any other year and believes that this is due to the recent clouds of “yucky” vog in the air and winds, which have triggered allergic and respiratory reactions.

The numbers, she said, are getting near the range of mandatory reporting to the Department of Health as epidemic.

Nurse Sue said she has been going through immune boosters and vitamin supplements by “the bottles” and urges students to take better care of themselves. “‘Sleep, fluid, and vitamins’ is my mantra,” she said.

Ms. Ka’awa said that leadership was also considering adding Saturday school for students to research and learn about the missed topic in the future and/or making attendance a commencement requirement.

“My favorite part was listening to all the speakers tell their stories,” sophomore Kūpono Aguirre said. “Itʻs important for us to hold steadfast to our culture because we don’t only represent ourselves, but the thousands of ancestors that came before us.”

On Friday, students were broken into four groups: freshmen and sophomores, and juniors and seniors. Then each group was divided into kāne and wahine.

In their groups, students learned the hula for the mele Kaulana Nā Pua and were taught the meaning of each verse by different guest speakers.

At the end of it all, the elementary, middle, and high school campuses came together, along with faculty and staff, for a mass all-school hula.

“Seeing all of our students from kindergarten to twelfth grade and all of our faculty and staff join together to share their own interpretation of Kaulana Nā Pua from their hearts, that made me happy, that they had finished the day gathering all kinds of mana’o from everyone,” Kumu Ekela said.

Kumu Ekela said that it makes her sad that students would miss not Pō’alima ‘Ula’ula, but school in general.

“Whether itʻs Pō’alima ‘Ula’ula, an assembly, or classes in your school, someone sits behind all of this and prepares a day for students to come and participate,” she said.

Students, especially seniors, shared their opinions  about the large number of absences at Red Friday in our survey. Here are the comments from students who identified themselves. If you would like to add your voice, please do so by filling in the comments box at the end of this story.

“There were no classes, and people thought it was not required to go to school. Also, perhaps they thought it would be boring.” – Timothy Osterhus, grade 10

“I think the reason why so many people were absent on Red Friday is because either there were no classes, they didn’t think that Red Friday is important or they didn’t care to take advantage of the privilege to get a deeper understanding about our culture through other kanaka maoli.” – Kiana Correa, grade 10

“They sort of try and force our culture down our throats. They spend a whole day trying to make us care which is why I believe everyone is stopping to care. They should spend little amounts of time on culture instead of a whole day. And also the fact that we spent a whole day learning one song to dance to and when it came down to it it really didnʻt matter if we knew the motions or not really made me feel like they wasted my day. I personally believe culture is important but when I look around I see the people losing faith and care in our culture and I think it is because how things are done here.” – Sarah Noelani Reyes, grade 12

“Absentees did not think it was necessary to attend a non-educational school day with no classes, because it was not required of them. Their Hawaiian values, determination, and attitude may be squandered and distraught by staff. I came to show my responsibility and leadership as a senior student at KSM. Curious as to what the activity might be; I was also excited to go to school, but disappointed to see the attendance of students. In order for students to realize the purpose of this day, Red Friday may need to have a greater consequence for not coming.” – Micah Ing, grade 12

“Honestly, I think that so many people were absent during Pōʻalima ʻUlaʻula because they didn’t care. They didn’t care to learn, they didn’t care to dance hula, and they didn’t care to sit and listen to the manaʻo of smart Hawaiians. They knew that they were not going to listen and participate in what was being said and done, so they stayed home to stay out of the way of the people who DID want to learn.” – Crystal Hipolito, grade 12

“No one cares about learning a hula they will only use once. Most people realized that it was a pointless day and that you could be more productive by not even coming to school.” – Jacob Pu’u, grade 12

“I know the flu season is here and a lot of people were absent, but I didn’t realize this many people were going to be “sick”. Maybe these “sick” people thought that because there wasn’t going to be classes and their grades weren’t going to be affected, they should just skip. Maybe they just don’t care about their culture.” – Kylyn Fernandez, grade 12

“I know many people were absent because they didn’t want to sit through a long day of hula, and because if they came or not, their grades wouldn’t be affected. That just shows that they donʻt care about our culture or our duty as Hawaiians; to be leaders for our younger brothers and sisters, to show our respect to our ancestors who worked hard for us to be able to survive and to those who dedicated their precious time to teach us about the importance and history behind Kaulana Na Pua (our people).” – Leimakamae Kea, grade 12

“I think so many people were absent because they thought that since we had no classes it was pointless. Those people missed out on mana’o from Hawaiians that know a lot more than we do.” – Tiare Ventura, grade 12

“I think a lot of people are absent because Red Friday is usually really boring and slow.” – Micah Alo, grade 12

“Because they didn’t want to sit in a room all day and learn a hula.” – Gideon Aiwohi, grade 9

“I think that so many people were absent because they don’t like dancing hula or had a bad experience in past years.” – Tyson Haupu, grade 9

“I think so many people were absent because they think that what they would be learning in school would not be as ‘fun’ as what they could be doing such as going to the beach, sleeping in, or just hanging out. I also think that since there arenʻt classes, technically the students feel they wouldn’t be missing out on any assignments, quizzes, or tests.” – Mele Ngalu, grade 11