Breast Cancer risk is above average for Native Hawaiians 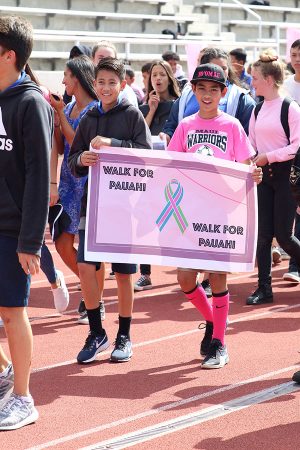 Seventh graders Kekilinahe Ting and Reel Yoshida express gratitude for Pauahi Bishop, the schoolʻs founder who died of breast cancer, at the Walk for Pauahi.

Breast cancer is a long and hard battle that millions around the world have to face, but Native Hawaiian women have a higher likelihood of getting breast cancer than other ethnic races that live in the Hawaiian Islands.

The National Institutes for Health say the chance of death in Native Hawaiian women with late-stage breast cancer is 1.5 – 1.7 percent higher than for Caucasian, Chinese, and Japanese females.

Here are more statistics about breast cancer in Hawaiʻi: