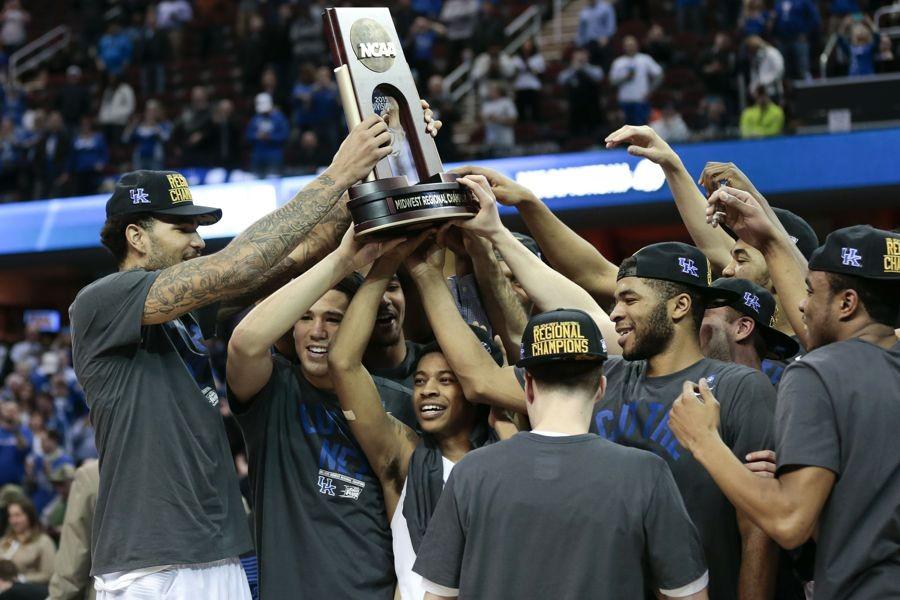 University of Kentucky players celebrate with the trophy after defeating Notre Dame, 68-66, in the NCAA Tournament’s Elite 8 on Saturday, March 28, 2015, at Quicken Loans Arena in Cleveland. (Charles Bertram/Lexington Herald-Leader/TNS)

Amid the Action: March Madness 2015

Here are some of my reactions to the final games of the 2015 NCAA college basketball championship. If you recall, I predicted the Madness would end with Kentucky over Gonzaga in the final game, 110-83, in the March 6 issue of Ka Leo o Nā Koa. Follow my blog postings to see how I did. The newest postings are at the bottom.

Honestly, I thought this game would be more of a blowout, considering that Notre Dame was playing. In the beginning, Notre Dame was absolutely dominating the Shockers.

Zach Auguste and Demetrius Jackson started off hot within the first two minutes, and with 14 minutes left in the first half, the Fighting Irish were up 20-8.

However, Wichita State’s Darius Carter and Ron Baker soon cut the lead to 17-23. By the end of the first half, Notre Dame was in front 33-30, which was pretty shocking. I figured maybe a 10-point difference, but 3? Wow.

Anyway, in the second half, Darius Carter and Fred Van Vleet made a big impact for Wichita State, helping to keep the game within ten points, but they could not prevail as Notre Dame walked off with a win and on to play the mighty Kentucky next.

I figured Kentucky would win it, but by a little more than two points! The third-ranked Irish were so close to upsetting arguably the best college basketball team in the country, so far, undefeated.

The first half was a shoot-out. Kentucky scored the first points of the game, but Notre Dame quickly responded with 2 points from forward Pat Connaughton.

From then on, it was two dominant offenses racing to see who could rack up the most points before the time ended. Notre Dame’s Zach Auguste and Jerian Grant did an excellent job of keeping the Fighting Irish neck-and-neck with the Wildcats.

Meanwhile Kentucky’s Karl-Anthony Towns shredded through Notre Dame’s defense, providing the bulk of the points in the first half for Kentucky. The first half ended in a tie, yes, a tie at 31-31!

Shockingly, the Fighting Irish held a lead until there were 2 minutes left in the game. A foul provoked free throws from the Wildcats’ Andrew Harrison. He made them both, breaking the 66-66 tie. Final: 68-66 Kentucky. They will play Wisconsin next, who is also number one in their region, the West.

Wisconsin jumped to an early 12-9 lead with 13:25 left in the first half. Frank Kaminsky, who is a major part of the offense, helped Wisconsin jump out in front. However Duke quickly responded with help from Jahlil Okafor and Grayson Allen to put the score at 13-12 Duke.

From then on it was a shootout between Grayson Allen and Jahlil Okafor vs Frank Kaminsky, Nigel Hayes and Sam Dekker. Duke’s Amille Jefferson’s point towards the end of the half made the first half score 31-31.

Starting off the second half hot, Wisconsin bumped up their game to lead Duke 48-39. But Grayson Allen pulled Duke out of their hole to cut Wisconsin’s lead to 48-45.

The game would go back and forth from then on, with Duke rallying to a 68-63 win.​ Wisconsin could’ve taken the game, but Duke’s offense was too overwhelming, propelling them in front.

Wisconsin had  the opportunity but could not hold on, and Duke has now won 5 NCAA Men’s Basketball Championships.