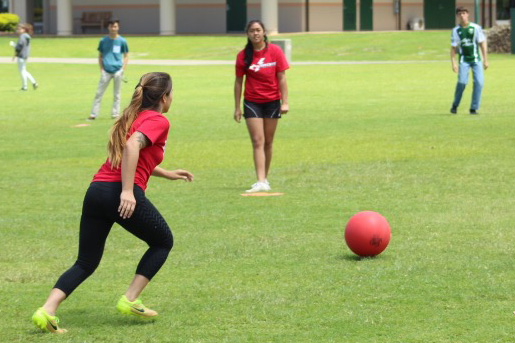 Clara-Josephine “Lei” Medeiros goes for the shot as she represents the senior class in their game against the freshmen at today’s kickball game during lunch. The kickball tournament is part of this week’s homecoming festivities.

Seniors seized a 6-0 win in a 4-inning kickball game against the freshmen at the first game of the homecoming tournament, occurring all week during lunch.

With their bright red shirts, the seniors took off to the quad in preparation for their game against the freshmen.

While the seniors were prepared for the competition, the freshman finalized their team at the last minute due to some previous members dropping out.

Although the team was newly formed, the freshmen had some surprises, such as Makena Nagasako, who caught a couple of balls from the air in almost each of the innings.

The game started slowly without a single score in the first two innings, but in the third inning, the seniors bolted into a 4-point lead, leaving the Freshmen behind to catch up.

The Freshmen were unable to score, while the seniors added two more points in the final inning.

With the final scoring from Daryn Nakagawa and Moanatea Keliiliki-Johnson with two, as well as Quinn Hottendorf, and Jordan Nascimento Takatani with one.

Many people came to the quad to cheer today, and tomorrow’s juniors vs. sophomores game is highly anticipated.

Come back tomorrow for an update on the outcome. 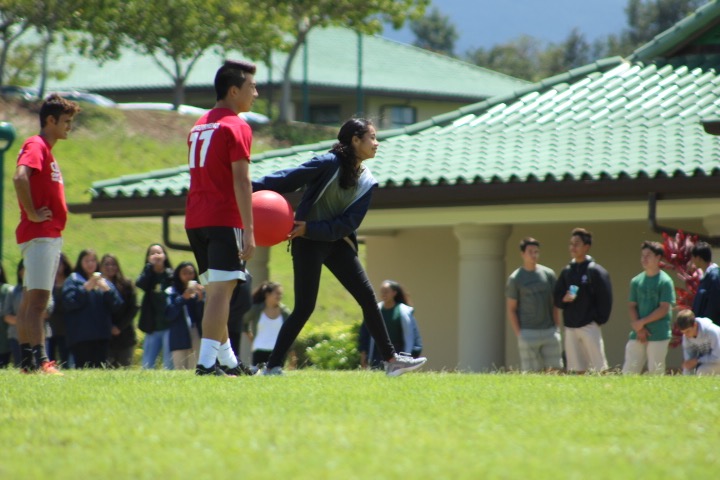 Gallery|4 Photos
Photo by Aaron Veincent
Elena Borge picthes the ball towards her fellow freshmen team members during the first inning of the kickball game.