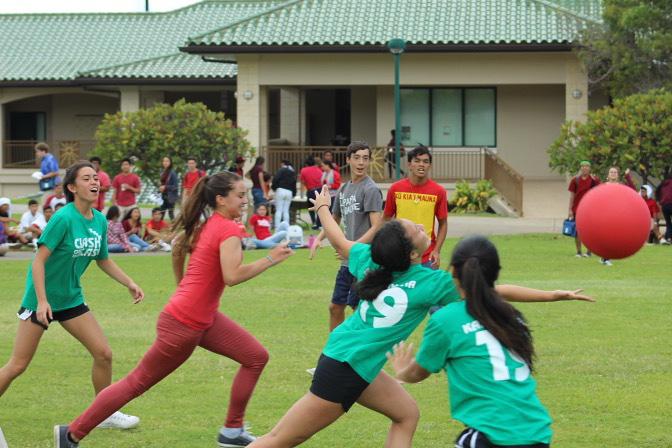 Sophomores stumble with the ball as freshman Faith Bonacorsi runs towards second base in the third and fourth place kickball game, Thursday in the quad. The freshmen prevailed and placed third in the tournament overall.

Freshmen came out victorious against the sophomores, 7-2 in the third game today, in 5 innings of the kickball tournament occurring all week during lunch.

Coming into the game with one loss each brought some tension to the field.

Though the sophomores were the older team by one year, that did not hold the freshmen back. Their team came to play with victory on their minds.

The game started with the freshmen gaining a 4-point lead against the sophomores who were unable to score in the first inning.

The sophomores began to pick up their game in the second inning, resulting in 2 goals being added to their score.

With the sophomores picking up the pace, the freshmen were jolted and scored no points in the second inning, which ended 4-2 in favor of the freshmen.

In the third and fourth innings, both teams played with high energy and neither team scored, but when the fifth inning came, the sophomores collapsed with many foul balls, misses, and easy-to-catch air balls.

The freshmen were able to pull off another 3 points, making the score 7-2, giving the freshmen third place, and placing the sophomores fourth.

After lunch tomorrow the kickball tournament will continue with the championship game of the juniors and seniors for first and second place.

The winner will then play a friendly game against a team of teachers among lots of other activities planned for the final day of homecoming week.