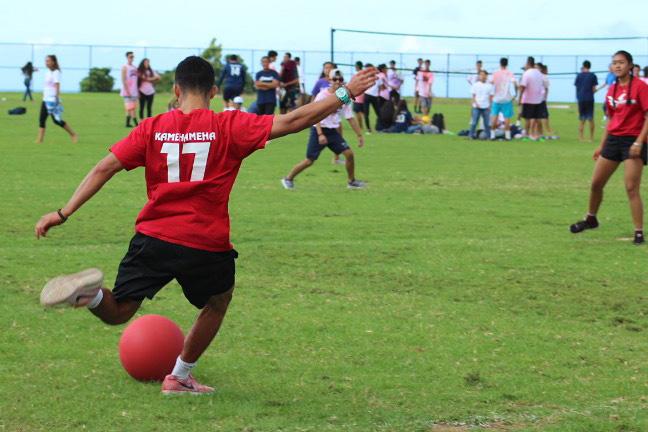 Senior Noa Moikeha-Silifaiva kicks in the championship kickball game of seniors against the juniors, Sept. 23, at the practice field.

The seniors did in the juniors, 14-2, in the 5-inning championship game of the kickball tournament yesterday afternoon.

The teams were evenly matched, both coming off 6-0 wins in the qualifiers that brought them to the championships, but after the second inning, the score was already lopsided.

The seniors took an early lead with a score of 4-0 by the end of the 2nd-inning.

In the third inning, the juniors started calling on the student referees about calls and how the game was being played, which seemed to disrupt the momentum of the seniors, and the juniors were able to stack up two points to the seniors’ none in that inning.

At points during the last innings of the game, the two teams visited the judges’ table to appeal rulings on the field.

Although conflict was rising, the referees relied on previously set rules to clear things up and settle matters, especially in regards to the types of kicks allowed.

The juniors, who initially tried to play an outfield game, moved their play to the infield, but the seniors put up a strong defense, racked up 10 more points and eventually won the game and championship, 14-2. 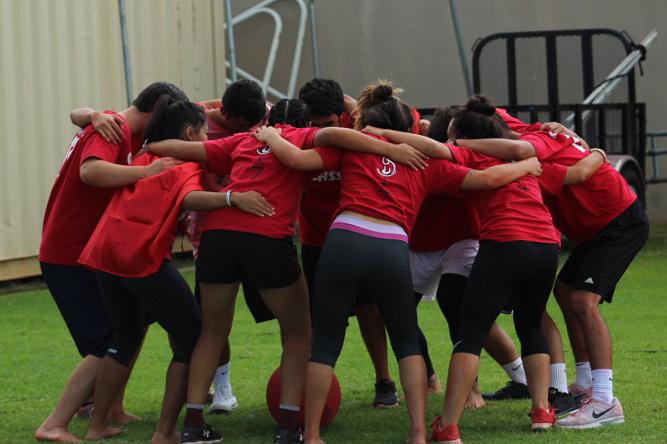 Gallery|4 Photos
Photo by Aaron Veincent
Seniors huddle before the kickball championship to get pumped up before the game.