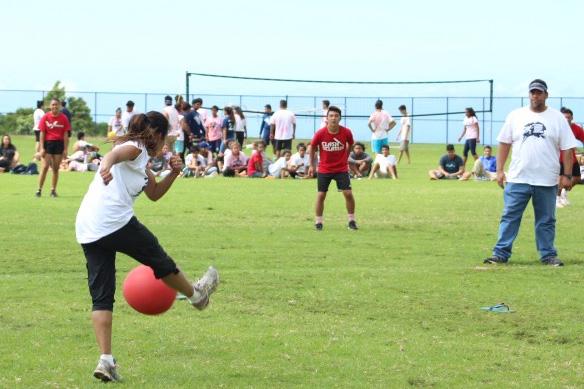 Ms. Helm goes for the kick as the seniors stand ready to react in the friendly kumu versus seniors game, Friday, Sept. 23. It was the final game in a weeklong kickball tournament that was part of homecoming activities leading up to the football game Friday night.

On Tuesday, Sept. 20, seniors and freshmen began the competition by taking it to the quad. Seniors won with a score of 6-0, with the game containing 4-innings.

The beginning of the game went quick with many balls being punted high, making them easily catchable, but as time went on, the seniors found a strategy and took the lead.

On day two, the sophomores played the juniors. The juniors took the victory with a score of 6-0 in a 5-inning game.

Thursday brought the losers from the previous games, the freshmen and sophomores, to play against one another. The freshmen got the win this time, with a score of 7-2 in a 5-inning game.

The week ended off with the championship game between the week’s two winners, the juniors and seniors. The seniors overcame the juniors with a score of 14-2 in a 5-inning game.

After their win of the tournament, the seniors were ready to take on their kumu, and they won, 4-0, in the 4-inning match.