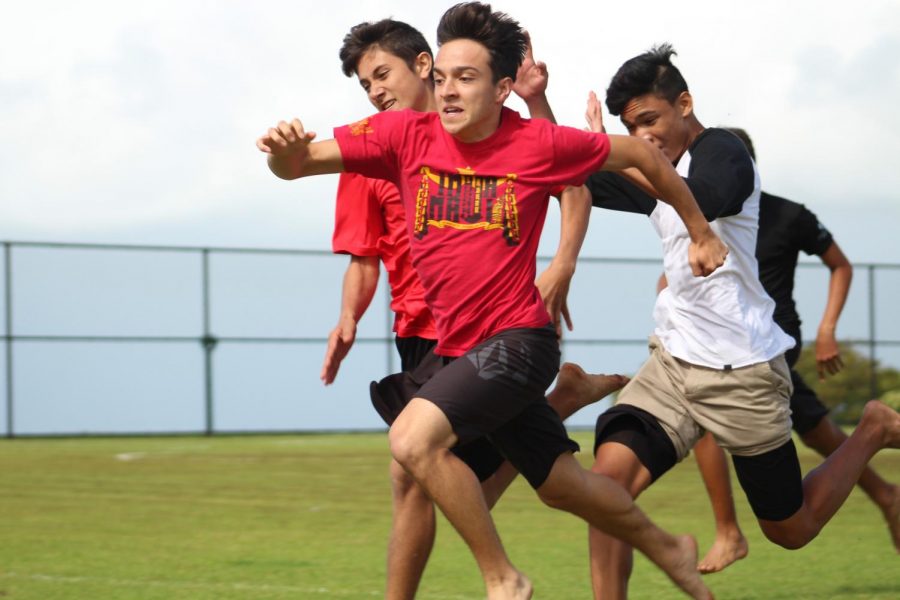 Junior Lee-Joseph Franco competes for first in heihei wāwae. Nowemapa 22 was the final round of competitions for Makahiki with several other schools coming on campus to compete.

Makahiki 2017 from KaLeo ONaKoa on Vimeo.

The final rounds of Makahiki competitions were settled Pōʻakolu with several other schools coming to compete against Kamehameha Maui’s event finalists.

Lahainaluna, Baldwin, and KS Scholars came to campus with their competitors for the Makahiki games.

Although the whole day was organized for Makahiki, most of the Kamehameha Schools Maui high school student body was not present. While most of the high school was in class, participants and kōkua haumāna were excused, with teacher approval, to attend the occasion.

At the end of the extended assembly schedule day, the entire student body attended the final events including the foot races and the crowning of the ʻano koa.

“It is always great to see students excited about other students and participating in culture. If that was the goal, then we surpassed that immensely,” said Kumu Kalei ʻAʻarona-Lorenzo, one of the organizers.

Beginning with an opening ceremony by Kumu Henohea Kane’s papa, hula, mele, and oli welcomed both guests and KSM haumāna to the all-day event.

Shortly after the ceremony the kūkahi competitions got straight into it. As had been happening at the qualifying rounds throughout the month of November, KSM haumāna refereed each game until there was one winner.

Each of these events consisted of one haumāna, for each KSM grade level, as well as one representative from each guest school.

The kāne winners for the kūkahi events:

The wahine winners for the kūkahi events:

After the kūkahi events ended, the crowd then moved to the Piʻilani Aquatic Center where the water events were held.

After the water events, haumāna and guests were then released to a lunch of Hawaiian food and entertainment by KSM’s finest, Hawaiian Ensemble.

The group presented a relaxing performance for the audience to enjoy during the competition break.

Following lunch there was another break period for any incomplete competitions to be finished.

During this time the rest of the non-participating haumāna finished their final class before coming down for the assembly. At that time they got a chance to watch the final hoʻohui events and the announcement of winners.

While participants waited, many picked up a lāʻau and played a friendly game of Kū Ka ʻIhe and Hina Ka Lāʻau.

This game includes players gathering in a circle, each with one lāʻau, and following the directions on whether to move hēmā or ʻākau.

When directed, the player must let go of their standing lāʻau and grab the lāʻau from an adjacent player according to the direction shouted by the leader.

The game lasted until there was only one standing, Janae-Mika Kahahane from Ka Papa Wauke.

As time came, all the haumāna finished class and gathered at the practice field with the participants. As soon as all were present, the hoʻohui events began.

Starting off with pāʻumeʻume, or hukihuki, each school brought their strongest teams of six individuals. In the end, Baldwin proved to be the strongest.

Right after the competition the event then moved into hoʻoili pōhaku, which resulted in a win for KSM with a lead over second-place Lahainaluna.

Over the course of the day, while all the events were occurring, ʻano koa candidates competed simultaneously.

ʻAno koa is a competition for individuals who want to compete for the overall title.

Entrants compete in all kūkahi events, with a sole winner  announced based on each person’s cumulative score.

“It was definitely long, and I didnʻt think I was going to win, but I was proud being the representation of Kamehameha,” ʻano koa Pedroza-Kanemitsu said.

“The importance of today’s events were to do what our kūpuna did, to understand what Makahiki is all about, and to come together,” said Kristy Pang, coordinator with KS Scholars.

After the awards and traditional ʻano koa ceremonies, all guests and huamāna joined to end Makahiki as one, singing Hawaiʻi Aloha.

Although this year’s Makahiki competitions were held during classes, next year both kumu and haumāna hope they will be.

“We can only get better. Not everyone knows about Makahiki, so I think if we keep on doing it in this way then it provides more ʻike for the students that don’t know, and they’ll want to participate,” Kumu Kalei said.

Like last year’s Makahiki, next year, several Ka Papa ʻAʻaliʻi haumāna will be hosting the event for their Hōʻike Nui product. This year’s event was held this way because no haumāna from Ka Papa Lama wanted to host it. 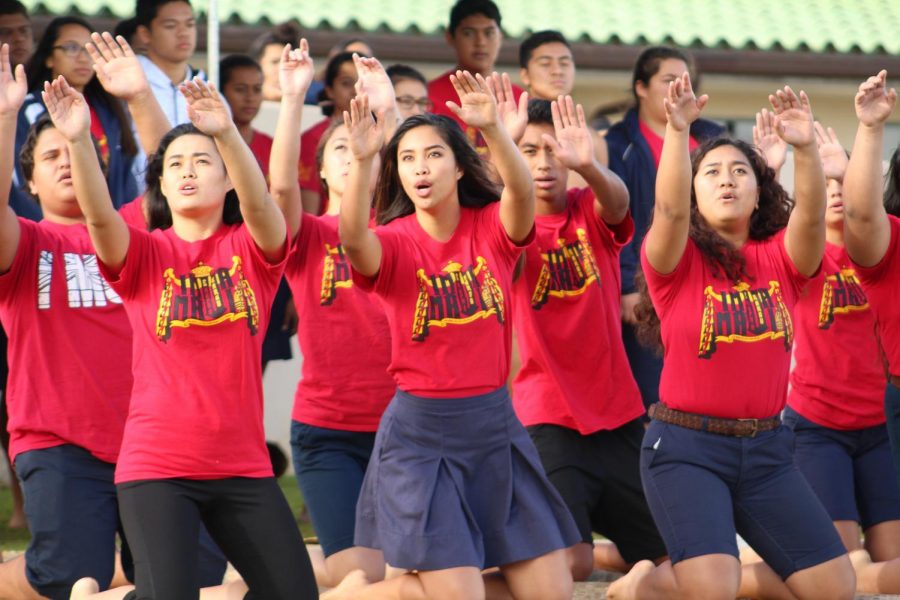