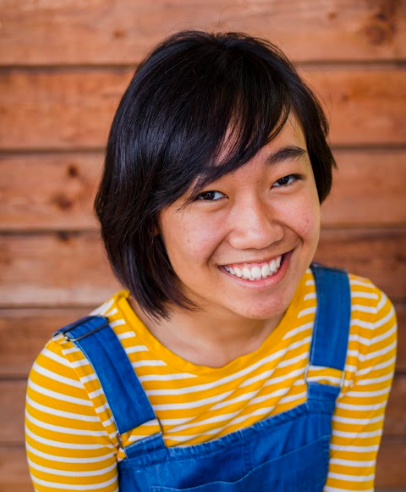 Award-winning sophomore Sean “Aimi” Sakamoto is making a name for herself as the heartbeat of the new morning broadcast show Ka Maka Koa.

Only in her second year of high school, Sakamoto already brings years of experience with her. She has competed in the Music Video and Crazy 8s categories at the Student Television Network national conferences in 2017 and 2018. Sakamotoʻs team won second place in 2017 and earned an honorable mention in 2018. The STN Convention is a national and international film conference that includes video production competition events for students.

To compete in the STN music video competition, students are given an original song and three hours to plan and shoot a video for it, with another three hours to edit. Filming outside of a certain area or not completing the video within the six hours results in elimination.

For the Crazy 8s, the KS Maui team was given a prompt, and within eight hours the team had to complete a documentary on it.

While in middle school, Sakamoto was also awarded for her work on Hiki Nō, a student-produced documentary program on PBS.

Additionally, one of Sakamoto’s  short films on bullying and suicide, which she made with classmate Haley Mahoe in the eighth grade, was a finalist at ʻŌlelo Community Mediaʻs 15th Annual Youth Xchange Student Video Competition.

While her film, Behind a Smile, did not win at the competition, Sakamoto also submitted it to the STN Nationals short film contest, and her work was awarded first place in the nation in her category, Creative Segment.

This year,  Sakamoto added the Ka Maka Koa broadcast to her list of projects.

People may think that video production and broadcast are the same thing, but Sakamoto says otherwise.

“I’ve been working in film for a few years now, but broadcast is a whole different story,” she said.

Sakamoto was drawn to Ka Maka Koa because “I thought it was interesting. It was new, and it had to do with film, so I thought I’d give it a try.”

When Mr. Rickard spoke to her about joining, she said that she had missed working on filming and wasn’t working on anything at the time, so it was a natural fit, and she enjoys “learning more about things that might come in useful later.”

She said she was up for the challenge.

”It’s been an interesting experience because doing things live is very different from what I’m used to do, so I’m trying to figure out how to use what I already know while also learning new things..”

Sakamoto is excited to be on the ground floor of this new outlet for student voices.

“I think a big thing is staying patient and knowing that we’re not going to be as impressive and close to perfect as we’re ever going to be right away while also not settling for things staying the way they are,” she said. “It’s been difficult though fun to figure out.”