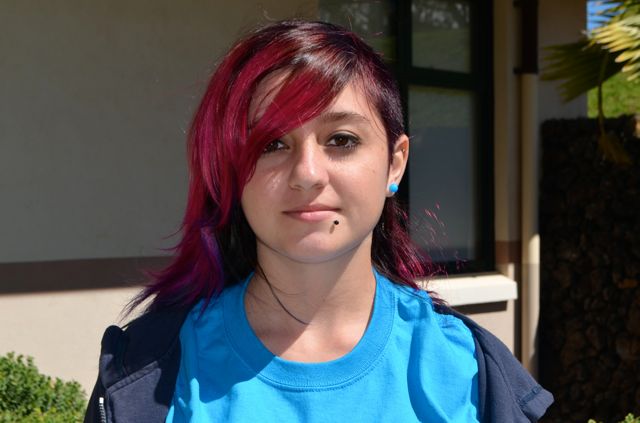 Lisa Doré is a student in the art field of Lycée Samuel Raapoto, who hopes to pursue a career in either animation or space design.

Lisa Doré is a 16-year-old sophomore at Lycée Samuel Raapoto who loves cats, art, traveling to new places, and the color blue.

Her love of colors is pretty apparent, with multicolored hair she got done this past Saturday from her mom, who’s a hairdresser.

“I give a strange first impression because of my hair, and all. But it’s just…the first impression is not always the true one,” said Doré, who said people tend to think she’s a bit unorthodox right off the bat.

“People will think that I’m a rebel, [that] I don’t want to obey the rules and all, but it’s just I like to express myself, so I will respect your rules, if you respect mine,” she said.

Doré explained that she’s one of very few Tahitians who color their hair.

“I’m the only one, because the girls in Tahiti find it weird to have color in [your hair], you know…[you don’t] look like the perfect Tahitian,” she said, also describing the ‘perfect’ version of a Tahitian girl: shorts, a simple top, and hair that’s black, long, and in an up do.

Hair isn’t the only creative expression Doré uses; she hopes to either become an animator “like the one you see in Disney and all” or a space designer.

“You can design a park, by example, where the bushes will be placed, where the trees, the bench, or it can be a whole building. It’s pretty different,” Doré said of one of her prospective career paths.

For now, she fills her days with art, which she decided to go into with her friend two years ago when they realized it was a field offered in their school.

“So far, it’s just awesome because we have a lot of project[s], and we do really a lot of things,” she said.

Although Lisa said she was enjoying her time on Maui so far, she still found the chilly winter temperature to be a bit unpleasant.

“It’s freezing, actually,” said Doré, who is used to not needing a jacket after 7 a.m. but was sporting one at around 1:00 in the afternoon here on Maui.

Although she might not be a huge fan of colder climates, Lisa still enjoys new experiences.