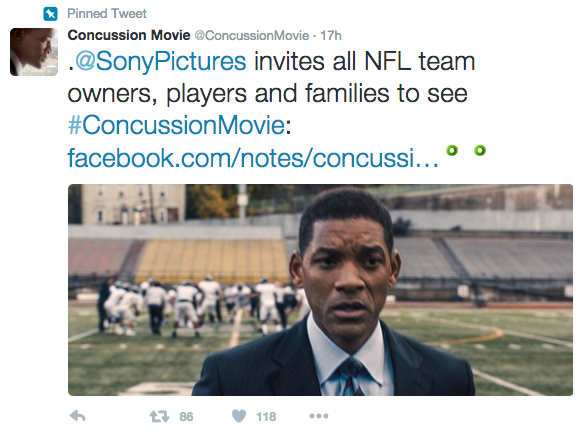 Concussion, a movie about the scientific work of Dr. Bennet Omalu, opens today in movie theaters. You can watch the trailer here, and read on to learn a little about the subject of the film.

Who is Dr. Bennet Omalu? Well, he may be one of the most important people in medical history. Dr. Omalu was the first person to expose his work and findings of chronic traumatic encephalopathy to the public.

Dr. Omalu was born in September 1968 in Nnokwa, Nigeria. At the time he was born, Nigeria was going through a civil war, which caused his family to flee to Enugwu-Ukwu in Southeast Nigeria. Two years later they returned to their original home. His mother was a seamstress and his father was a civil mining engineer.

He discovered CTE in National Football League players in 2002. One of his case studeies was Mike Webster, who played for the Steelers on the offensive line and died unexpectedly.

Before he passed away, he struggled with mental and emotional issues and even attempted suicide. Webster also suffered from drug abuse. With colleagues from the University of Pittsburgh, Dr. Omalu published his research on CTE in 2005 and titled it “Chronic Traumatic Encephalopathy in a National Football League Player.”

That was when he coined the name CTE. In 2006, the Mild Traumatic Brain Injury Committee said his work was “completely wrong” and labeled it as a “failure.”

Later on, Omalu would go on to find the same symptoms in Terry Long, Andre Waters, Justin Strzelczyk and Tom McHale. He showed his findings to Roger Goodell, the NFL’s commissioner, but the work was dismissed. The NFL didn’t recognize the connection with CTE and concussions in the NFL until 2009.

The battle to get recognition from the NFL was a hard-fought one, with Dr. Omalu persevering until he was successful at getting the league to admit the connection between football and CTE. Deadspin.com has an excellent timeline of the significant events that exposed the danger of concussions in the National Football League, leading up to Dr. Omalu’s victory. Click here to read it.