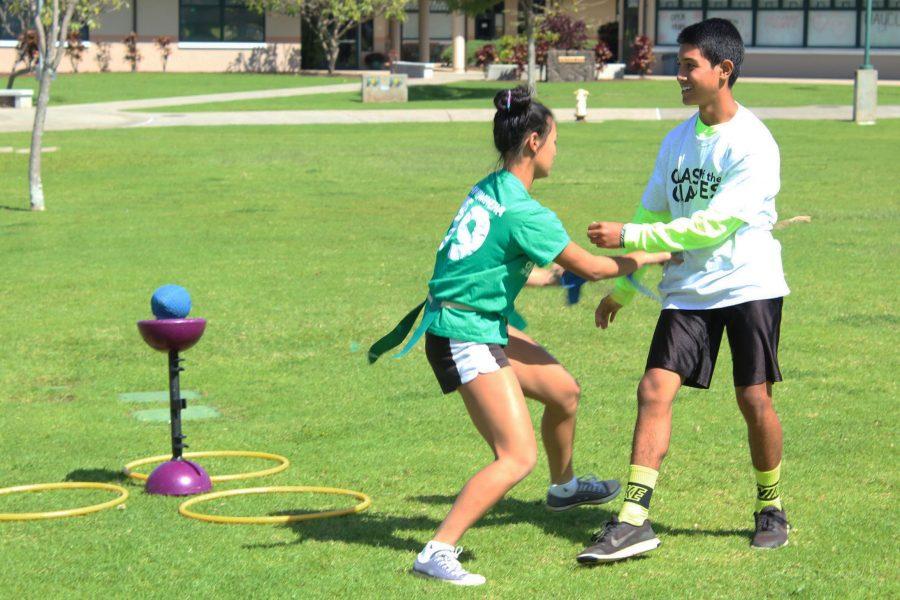 Sophomore Kayleen Lau pulls freshman Cj Hamasaki’s flag, sending him to jail. The sophomores took a surprising win against the freshmen for a spot in the championship game.

Sophomores got the win against the freshmen after they won a tie-breaking game of jan ken po.

The game started quickly with a “go” from the student referees. The games started so quickly, as a matter of fact, that the sophomores weren’t even on the field. This gave the freshmen the advantage of getting a quick chance at the ball.

Picking up their game the sophomores began playing offensively, while the freshmen play in a more conservative matter in attempts to keep their one-point lead.

The freshmen’s lead did not last too long though; the sophomores scored a point.

The sophomores’ score was controversial. The controversy swirled around scorer Henry Miguel and his attempts to deflect the ball on the opposite side.

The referees didn’t see the play, and the sophomores kept the point despite the crowd contesting it.

“It was a tough play to call, but we had to [call it]. I didn’t see what happened,” ASKSM president Kūlia Fernandez said.

Unlike in the previous seniors versus juniors game, the underclassmen did not receive an extra minute to play, and the game ended in a tie once again, so it went to jan ken po.

C. J. Hamasaki represented the freshmen, and Miguel played for the sophomores.

The result: the sophomores won with scissors over Hamasaki’s paper.

Gallery|4 Photos
Photo by Aaron Veincent
Sophomores line the border between their and the freshmen's side.