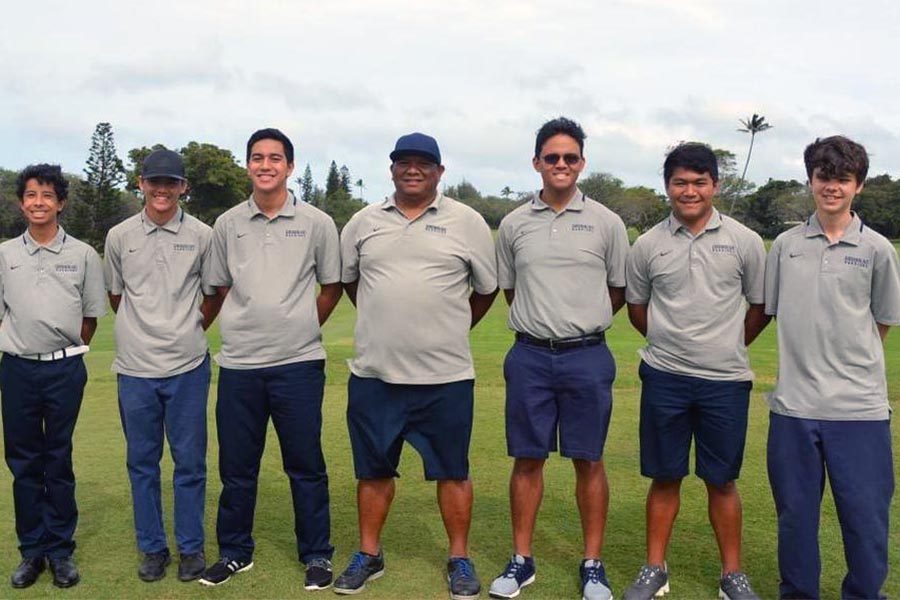 Photo by courtesy of Kody Cambra

The boys golf team. Jordan Mitsumura and Dane Abarra competed in the HHSAA Boys Golf Tournament on Oʻahu, May 9-11.

The boys golf team made it through the season with top competitors Kody Cambra and sophomore Jordan Mitsumura qualifying for the state tournament at the Maui Interscholastic League championships, April 13-14.

Cambra’s best score of the season for 18 holes was 47 while Mitsumura’s was 41. The two boys shot their hardest until the MIL Championships.

He expected this much considering he has not played golf since he was seven years old and in junior golf. Cambra played golf when he was younger but grew out of the sport until recently joining the high school team.

“Once my friend got me back into [golf], it was all over because I learned to love it and enjoyed the sport as a whole,” he said.

Coach Kalani Abarra pushed the team and Cambra to shoot their best games this season and most of them did. The boys golf team of six gave it their all, and they had a great season overall.

The boys bonded over weekend practice trips to the golf course, where they golfed, talked and enjoyed each other’s company.

Cambra said he looks ahead to the next season, and he’s ready to start preparing by committing his weekends and free time to golf between now and then.

“Golf is a sport that needs continual practice and repetition. The only way you can get better is by going out and actually playing the sport,” he said.

The boys golf team had juniors Dane Abarra and Jordan Mitsumura competing in the HHSAA Boys Golf tournament. Abarra scored 90 and 82 for total of 172 and Mitsumura with 92, 86 and a total of 178.

Junior Sherri “Hōkū” Nagamine represented for the girls as the only player on the team.

“Although she didn’t have a team to participate with, she qualified for the state golf tournament by finishing in the top six at the MIL Individuals,” her father/coach James Nagamine said when she was honored with the Most Outstanding Player certificate at the recent athletics banquet.

He added that Nagamine was the only Kamehameha Schools girls representative from among the three campuses.

“She played with integrity, humbleness, and a great finishing score of 75,” Coach Nagamine said.

Hōkū scored an 86 in the first round and a 75 in the second round, placing her near the middle of the pack overall with a total of 161.

Jordan Mitsumura was also named Most Outstanding Player, and, among his many attributes, Coach Abarra pointed out that Mitsumura’s work ethic is part of the reason for his success.

“He practices on his own; he’s always the first to arrive, and the last one to leave,” and although he demonstrates great problem-solving skills, heʻs never afraid to ask questions too, he said.