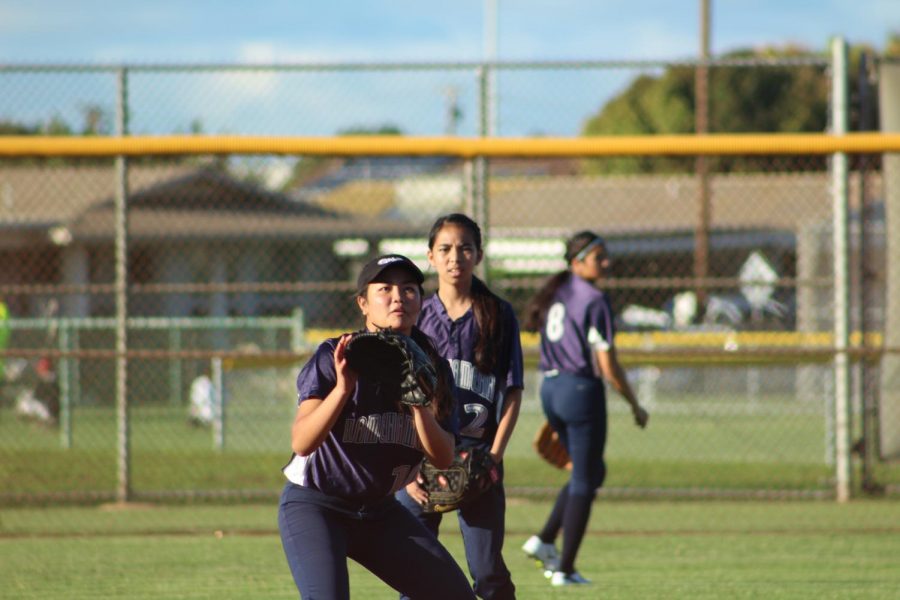 Sophomore Malie Watanabe prepares to catch the ball during warm-ups.

The Maui Warriors girls softball team used the experience of this year to build up their young athletes. The team consisted of two seniors, three juniors, eight sophomores, and two freshmen. The Warriors had five wins and seven losses, which is an improvement from last season’s record of 14-1.

“The goal going into this season was to play aggressive and to have the mentality that we’re good enough to play with the other teams,” senior Kyana Nagasako said.

The pitcher for the team was freshman Melia Kama, who will be continuing and training in this position for the next three years. Sophomore Jerriah Solomon is one of the leading hitters on the team.

For Nagasako, it was a highlight to play “with a team that has so much potential [when] they put their minds to it.”

This season, the girls fell short in the semifinals against Lahainaluna losing 19-4 in three innings. They tied for third with Maui High School in the Maui Interscholastic League with an overall score of 5-7-0.

Baldwin High School was the MIL champion this year, and Lahainaluna came in second.

Although the Warriors did not make it to the state championship, they showed great improvement from last season.

Coach Vaught said that “for the future, [they’d] like to build upon the foundation that’s in place and continue to challenge [themselves] to play at a higher level as a team.”