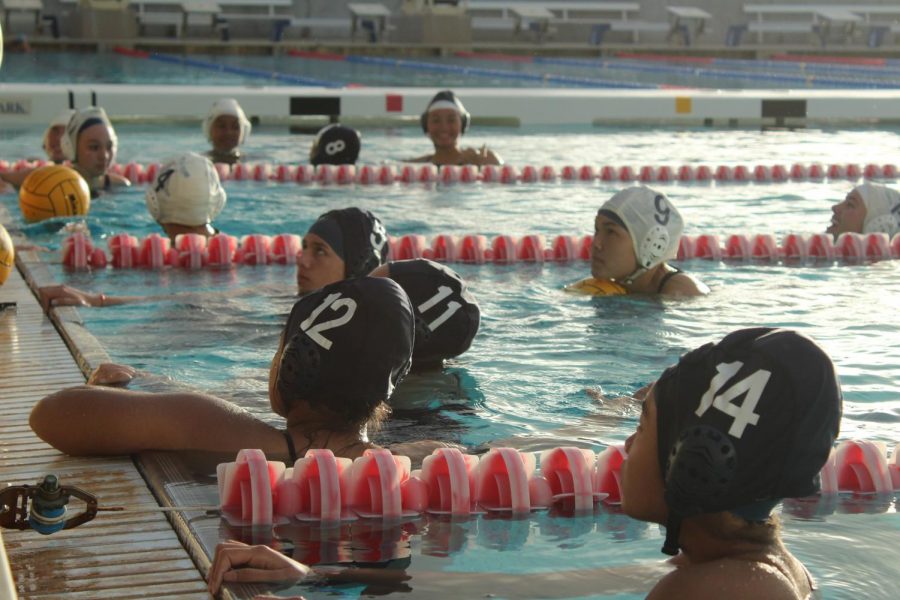 Photo by courtesy of Mahie Borge

Sophomore Mahie Borge and teammates stop between drills for instructions. The water polo girls went 0-14 this season, including preseason.

A new coach plus a whole new team brought the Warriors a difficult water polo season this year, with no wins and eleven losses in the Maui Interscholastic League.

With only five returning players, the rest of the water polo team consisted of first-year members, most playing the game for the first time this season.

Right off the bat, assistant coach and previous head coach Allyn Kalaiwaʻa said the season would be a “recovery season,” since most players were still learning the game.

For returning sophomore Elena “Mahie” Borge, her dedication to the sport easily made her a leader.

“It kind of came natural to me,” Borge said. “Because of my love for the sport, I wanted us to do our best, so by doing so I made sure to help out my team in any way possible.”

Like most of the team this year, Borge jumped in blindly last season, her first time in the sport.

“My teammates and I were really close last year,” she said. “It’s really because of them that I love water polo and want this yearʻs new players to love it too.”

Borge didn’t only work with the new girls, but she also improved and prepared herself for the season as well.

“After last season Coach Allyn recommended me to do swimming so I can be stronger in the pool, so that’s what I did. I joined a swimming club over the summer and also swam for our school this season.”

Borge is one of the seven starters and one of the team’s biggest motivators. She received the Leadership Award from her coaches at the end of the season.

After the teamʻs improvement throughout this year, Borge said she is ready for next year.

Head coach Chris Calvert is also preparing for next year’s season. He held several water polo clinics after school throughout the month of May. The clinics provided those interested in playing, especially middle school eighth-grade girls, a chance to come out to practice, learn, and refine their skills so that next year, the team will not have to face an influx of first-timers again and can get off to a running start.