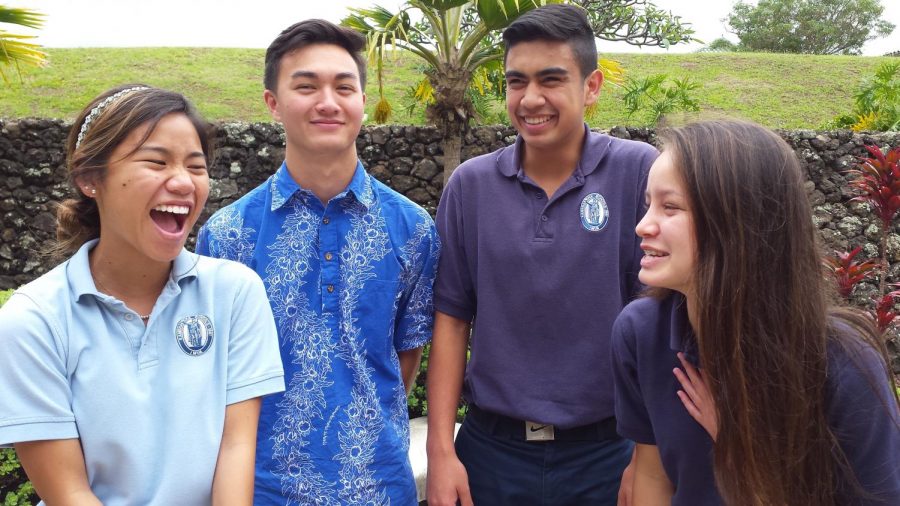 Hunter Worth enjoys a light moment with his fellow valedictorians. His leadership and academic accomplishments made him one of four valedictorians in the class of 2018.

Hunter shows his Worth

Associated Students of Kamehameha Schools Maui president Hunter Worth graduates this year as valedictorian. Worth demonstrated his talents in academics, sports, clubs, and other extracurricular activities.

Since he was in the sixth grade, Worth has participated in track and field. He also was a part of the swim, cross country, and baseball teams during high school. As part of the track team, he was junior varsity champion in the triple jump and went to the HHSAA meet as part of the 4×400 team, who was second in the MIL, in his sophomore year.

The year, he went to the state meet as a pole vaulter and placed eighth.

He has been in student government for all four years of high school as class president in his freshman and sophomore years and student body vice-president in his junior year, all leading up to his ASKSM presidency in this, his senior year.

“My motivation is my future. I’ve always wanted to do well in life and be able to pursue what I love no matter what that is,” Worth said.

Worth was not only a part of student government and sports, but he was also a member of the National Honor Society, a Maui District Student Council Organization representative, and a mentor to the middle school robotics team for three years.

In the community, Worth has demonstrated service leadership as a two-time member of the Kalaupapa mission trip and as a bone marrow registrar.

Managing time for everything was a challenge.

“Some struggles were prioritizing school, clubs, and sports. I’d usually be drained at school because I wouldn’t get enough sleep. Sleeping in was always a blessing,” he said.

He learned to juggle, including his sleep, and was rewarded by being named one of the four valedictorians.

“It feels pretty cool being recognized and seeing all your hard work pay off in the end,” he said.

In addition to the school curriculum, Hunter has been part of the national STEMPREP Project, whose goal is increase under-represented populations in STEM careers: Science, Technology, Engineering, and Math. For eight weeks during the summer, he would attend intensive advanced workshops at the University of Washington, Seattle.

He will be attending Princeton University next year where he will be majoring in biomedical engineering.

As of this writing, he has amassed a number of scholarships to help him accomplish his goals, including the Soroptimist International Maui 2018 Youth Citizen Award, a Pauahi Scholar award, Karen Uno Distinguished Student Award (Mamoru & Aiko Takitani Foundation), and Maui’s Sons and Daughters of the Nisei Veterans and Maui AJA Veterans Legacy Scholarship.

His parents, James and Eleanor Worth of Kula, have played a large role in inspiring Hunter to do and be his best.

“I also am motivated by my family and friends who continue to encourage me and push me to do my best even when I think I can’t,” Worth said.

In fact, his motto exemplifies his family’s philosophy: “Work hard, be kind, and good things will happen,” he says.