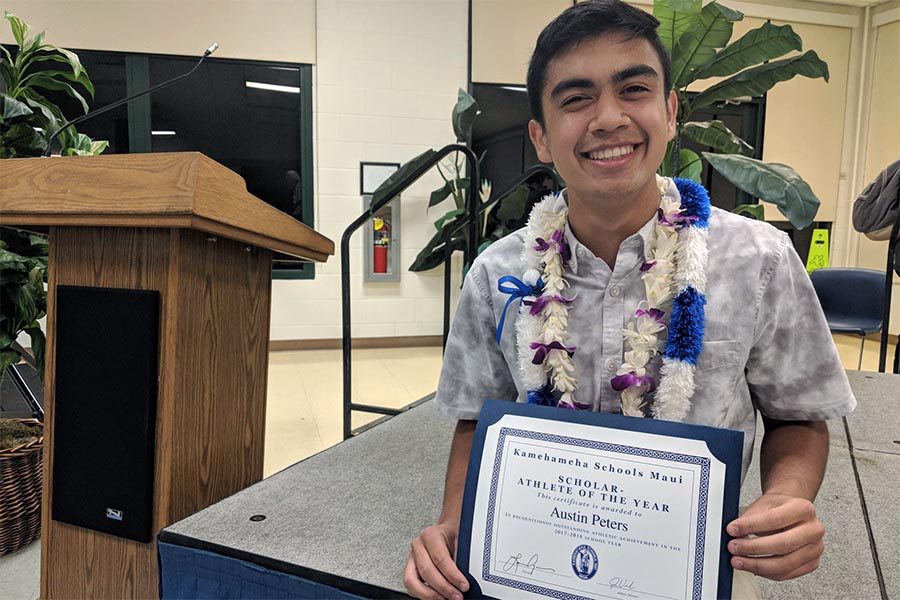 Senior Austin Peters is recognized with the Most Scholarly Athlete Award May 16 at Keʻeaumokupāpaʻiaheahe Dining Hall. One of four valedictorians for the Class of 2018 Kap Papa Lama, Peters was named valedictorian, and it has been a life-long goal for him.

After four years of blood, sweat, and no tears, senior Austin Peters has made it to the end of his high school year, fulfilling his life-long goal of becoming a valedictorian.

Peters, along with three other seniors, was named valedictorian for the class of 2018, and he has never been more proud of himself.

“All of these values and lessons that my parents and other influential figures in my life taught me is the reason that I have been able to achieve all of my accomplishments, including becoming valedictorian,” Peters said.

Mother Karla Peters and father Angus Peters Jr. said Austin was taught to be “disciplined and have a good work ethic,” and he did exactly that.

He kept a cumulative grade point average of 4.0 while playing hard to be named Maui Interscholastic League Boys Basketball All-Star and Volleyball Player of the Year. 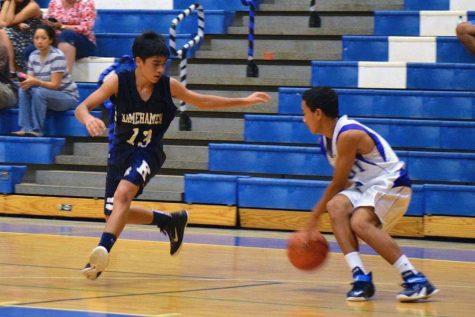 Photo by Courtesy of Ka Leo O Nā Koa
Peters plays defense against Saber in his freshmen year on the junior varsity boys basketball team.Peters is a leader at heart. He held seven leadership positions for Kamehameha Schools Maui, including treasurer for the class of 2018, vice president of the KSM chapter of the National Honor Society, and an officer for the Letterman’s Club.

One leadership position Peters is proud of is his vice presidency on the Hawaiʻi High School Athletic Association Student Advisory Council.

Former KSM Athletic Director Blane Gaison asked him in 2015 to take a leadership position to represent the Maui Interscholastic League athletes. Peters was captain of the Warriors Boys Basketball and Volleyball team since his freshman year, so he was familiar with the responsibility.

But looking back, Peters said, “It was not always simple.”

He sacrificed most of his free time on the weekends, after school, and during lunch to fulfill his responsibilities as a leader and a student-athlete. Peters said he had club meetings almost every day along with class exams and tests he needed to finish.

When he started his final year of high school, Peters struggled to stay on steady ground.

At the beginning of the 2017-18 school year, Peters did not get enough sleep, which resulted in his wake-up call after totaling his car when he dozed off while driving.

He said the wake-up call “showed [him] that relaxation is the most important part when managing [his] responsibilities.”

Peters made a big decision to put time aside for his family and friends, and he has never been better.

On May 16, Peters was awarded two scholarships at the Senior Awards ceremony in Keʻeaumokupāpaʻiaheahe Dining Hall. The Foodland Shop for Higher Education Scholarship and the All Pono Organization Scholarship. He plans to attend the University of San Diego in California in hopes of majoring in business or engineering. To help him, the school awarded him the Alcala Scholarship of $25,000 a year for all four years.

Peters won’t play college ball, but he will continue to play the two sports he loves recreationally.

He continues to give back to Bernice Pauahi Bishop and Kamehameha Schools Maui, or his “second home,” for helping him succeed in the past 13 years.

“I knew that I had to give back in any way I could, and that is where my clubs and sports came into play,” Peters said.

Catch Peters and the other three valedictorians at the class of 2018 graduation ceremony May 26 at Ka’ulaheanuiokamoku Gymnasium.