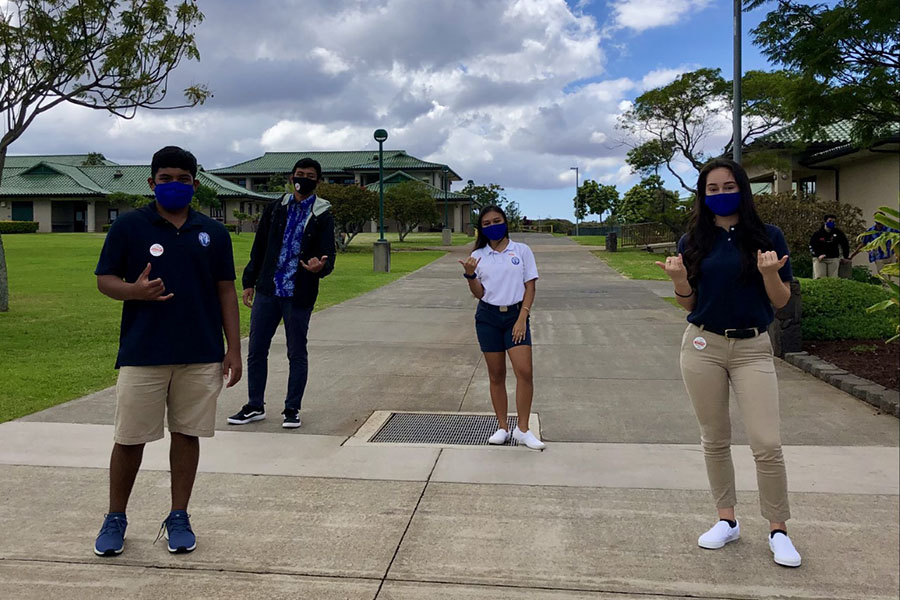 Seniors Hinano Lovell, Kiha Kahalehau, Savannah Rose Dagupion, and Teilana Akre show how to properly distance socially on their first day back to school, October 19, two months after the official start of school.

Seniors Hinano Lovell, Kiha Kahalehau, Savannah Rose Dagupion, and Teilana Akre show how to properly distance socially on their first day back to school, October 19, two months after the official start of school.

Students and staff have been transitioning from Zoom classrooms to in-person instruction this week following the school’s new hybrid learning plan. This plan was developed over fall break when the COVID-19 cases on Maui decreased enough for students to return to campus more safely.

The hybrid plan was introduced at the start of the school year; however, cases in August peaked at 142 active cases, putting the plan on pause. At the beginning of October, the number dropped to only 17 active cases, which permitted the hybrid plan to continue.

The plan allows students to come on campus by grade for two days and meet virtually for the other two days. Administrators were thrilled to kick off the plan by welcoming the upperclassmen last week, with seniors on Monday and Tuesday and juniors on Thursday and Friday.

The seniors got to experience their official “last first day,” and many enjoyed seeing everyone again despite the unconventional rules and social distancing.

“It was great to see my friends in person and I feel as if I was more productive!” senior Kiana Holokai said.

The senior class even came to campus on September 23 for the SATs, and the success as well as the excitement of the students on that day was a good indicator of how well the back-to-school plan would work.

“Being back in person is a priceless high school experience now, especially for seniors,” senior Kalena Wojcieski said.

This week, the sophomores returned on Monday and Tuesday, and the freshmen return on Thursday and Friday. Even though the underclassmen were able to get a little taste of in-person learning before the school shut down, there is still anticipation in the air upon their return this week.

“I have not yet been back face to face yet [since the beginning of the school year], but I am definitely excited and super nervous,” said freshman Malia Marin.

The school has been taking many precautions to ensure the safety of the students, including wellness check surveys before they arrive at school, temperature checks, sanitizing stations in every classroom, and pathways with directional ʻiwa birds so students donʻt walk too close to each other during passing times.

Students are required to wear their masks and stay six feet apart. Desks are set up to maintain the distance in classrooms, and during lunch time students sit outside far apart from each other since masks have to be taken off to eat.

To emphasize the importance of safety during COVID-19, Lāhui Kapu took effect on the campus. The kapu encourages students to be conscientious of their own health and the health of their lāhui. Students attended a presentation to learn about how to perpetuate our Hawaiian culture and show aloha while following the CDC guidelines.

Kumu Lōkahi said that people can show their aloha by wearing masks and keeping at a distance.

If this first round of in-person instruction goes well, the school hopes to start letting students on campus more frequently or start allowing two grades on campus at a time to ease back into a normal school.

Going back to school amid a pandemic has been a mixed bag of emotions for sophomore Poʻokela Aiu, as it has been for many others in his shoes.

“It’s been pretty good being able to see all of my boys and my classmates. It was also nice to be able to interact with human beings that are not my parents and family,” Aiu said.

Aiu said his social skills had gotten rusty and were in need of some oiling.

Being able to hang out with his friends helped with that, but still it wasn’t quite the same.

“I personally don’t like these new rules at all, but you know what? If it keeps us safe, and the kumu safe and especially our families safe, then we gotta do what we gotta do,” he said.

Aiu, who last year was a freshman standout at wide receiver on the varsity football team said he was sad to hear about sports being delayed until the end of the school year. Aiu also plays varsity basketball.

“I am sorry to the seniors this year, and if I could do anything to make things go back to normal, I would,” he said, “but sorry, I don’t have any super powers, so it is what it is.”

Like the many other student-athletes who will potentially miss playing team sports this year, Aiu has accepted the situation and said they “just gotta keep training and stay ready because this is a time of change.”

He has been doing his best to keep in shape, with many of his workouts consisting of push-ups, sit-ups, and pull-ups. Since the school’s weight room is closed, he is also lucky enough to travel to his friend’s house to work out with weights.

“I’m trying to do whatever I can to stay in shape, so when the season comes, it’s like nothing,” Aiu said.

To take the next step in his athletic development, he has been working on getting faster and more agile. He has also worked on his catching and route-running, so he can get open more often.

“I have been putting in the work, so hopefully, we see the results,” he said.

Even though it is exciting to go back to school, it feels empty.

“I miss my upperclassmen friends, I miss my freshman friends, I just miss everyone and everything normal pre-COVID,” Aiu said.

He said that despite the current state of being a student in 2020, that neither students nor athletes should let up.

“There is always someone out in the world working harder than you, so get motivated and follow the lāhui kapu. I love everyone and hope to see all of us back in school.”