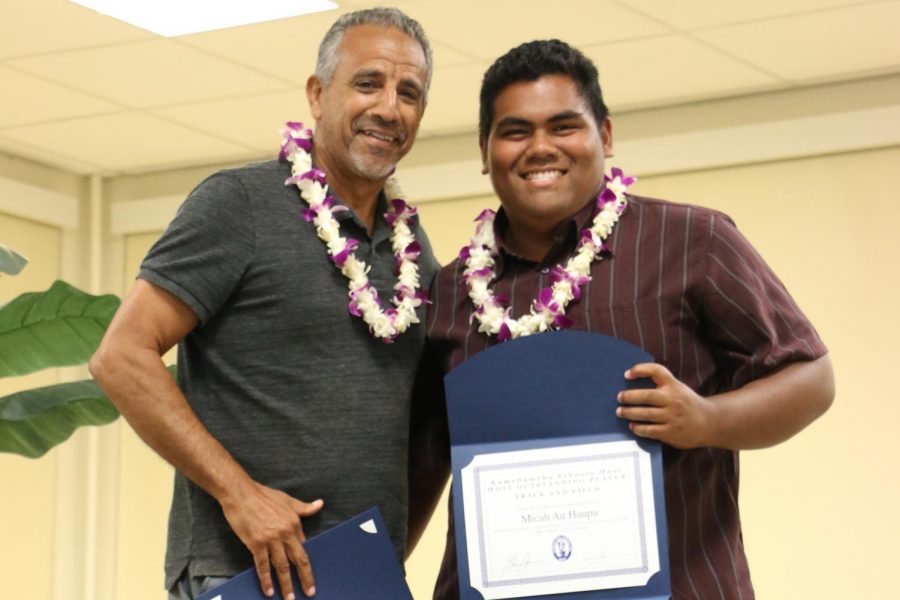 Junior Keely Logan and senior Micah Au-Haupu were two of the ten Maui athletes to receive a gold medal this year. Logan medaled in girls high jump at 5 feet 1 inch, and Au-Haupu medaled in boys shot put with 51 feet and 3.25 inches.

Overall in the state, the KSM girls tied in 14th place with Mid-Pacific, and the boys tied at 15th with Waipahu and Castle.

Logan and Au-Haupu had a big part in boosting the teams’ points with first-place finishes, but their work couldn’t have been possible without their rigorous training and determination throughout the season.

“Physically, I would do a running workout three days a week, and then the other two would be my days to practice jumping,” Logan said. “Mentally, I would just visualize me going over the bar over and over again.”

Throughout the Maui Interscholastic League season Logan was ranked first in the state for girls high jump. She said that most of her training was mental, constantly reminding herself that she wasn’t just there to compete, she was there to win.

At the state finals, to test her strength even further, Logan had to compete in a jump-off against ʻIolani’s Kellie Okamura for the gold medal. In a jump-off, the two competitors make one more attempt at the height at which they failed. If no decision is reached, the bar is lowered in 1-inch increments. If two or more of the tying contestants clear that height, the bar is raised in increments of one inch. Each competitor attempts one trial at each height until a winner is determined.

“It kept going back and forth between us, but she missed her jump at 5 feet 1 inch, and I made it,” Logan said.

At first, Logan didn’t notice she’d won gold. It wasn’t until her cheering teammates came running up to hug her that she realized she had won.

“I went up to my coach and asked him if [Okamura] still got to jump, and he said, ‘What’s the point? You won,'” Logan said. “I started crying. I was so happy. I can’t even remember anything that happened after. “

Logan plans to return next year to defend her state title and hopes to jump over a height of 5 feet 4 inches. In preparation, she will begin training for the next year’s season in about two weeks.

Au-Haupu’s journey to gold was similar.

Training in shot put since he was young, he always kept “positive and visualiz[ed] winning” with the same type of vision Logan had.

After years of training with his father, a man whom he considers to be his coach, he was “mentally and physically prepared for this state title.”

During the MIL regular season, Au-Haupu threw a distance of 51 feet and 5.5 inches, 2.25 inches farther than his HHSAA throw.

Like Logan, Au-Haupu did not reach his personal record of 52 feet 5 inches at the state meet, and getting to the gold was not easy. It came down to the top two in the finals.

“It was quite a battle between me and Punahou,” Au-Haupu said. “His throws [and mine were] topping one another after every throw.”

In the end, Au-Haupu overcame Punahou’s Alama Uluave, beating his throw distance by a mere quarter of an inch.

“When I found out I won, it was sigh of relief,” Au-Haupu said. After years of preparation, his work finally paid off when receiving the gold.

Although Au-Haupu is graduating, he plans on continuing his training and shot put career. Au-Haupu has signed with St. Martin’s University for collegiate track and field and dreams about making it to the Tokyo Olympics in 2020.

“There is no easy path to achieving your goals and dreams,” Au-Haupu said. “I️ have the state title for KSM. Let’s not make it the last.”

To see how these two athletes and the rest of the team performed at various meets, click here.